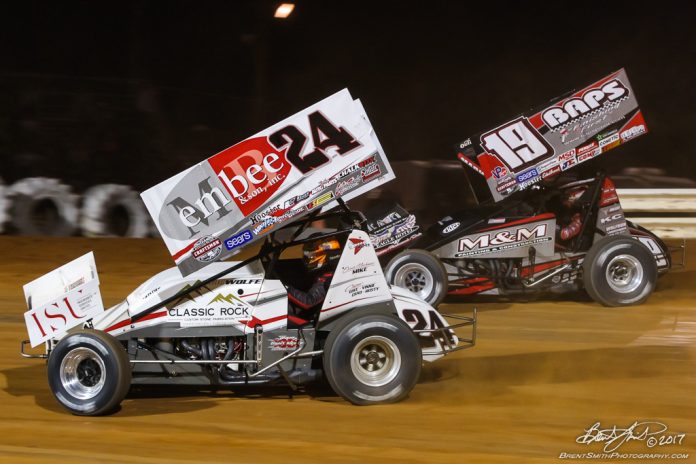 The feature was held over and completed on Monday evening after rains on Sunday night postponed the event mid-race.

In the 25-lap URC Sprint feature, it was Greg Hodnett getting by Aaron Ott during a late race restart to claim the $2,000 to prize.

Additionally, after the Sunday postponement, a pair of 15-lap dash races were held for both sprint car divisions, in order to reward all drivers and fans for returning to the track for a third night in a row.

A total of $12,000 in additional purse money for the dashes was added to the already posted $90,000 weekend payout that found Lance Dewease scoring the 410-sprint dash and Curt Michael claiming the URC dash.


Second starter Trey Starks of Washington state got the jump on polesitter Greg Hodnett to take the lead at the start of the 35-lap Bob Weikert Memorial.

Hodnett dropped backwards during the first several laps as both Dylan Cisney and Aaron Ott overtook him after starting in the second row.

Ott made his first attempted pass on Cisney for second on the fifth tour but Cisney returned the favor and a lap later the leader entered the backmarkers with eighth starter Wolfe up to fourth, ahead of Danny Dietrich.

Wolfe was howling at the heels of both Ott and Cisney on the 12th tour and got around Ott for third two laps later.

Starks was still way out in front however with Cisney running him down in traffic when the lone caution of the race unfurled with 19 laps to go for a stopped George Streaker Jr. in the second turn, wiping out a more than three second lead he had amassed over the field. .

Cisney and Wolfe kept Starks much closer when action resumed and as the race wore on, they were clearly gaining on the leader while also battling one another for second.

Amid heavy traffic, Wolfe pulled the trigger on Cisney for second while hanging onto the narrowest strip of outside rough to gain momentum around the extreme top of the first and second turns.

But Cisney fought back and raced wheel to wheel with Wolfe all the way up to the fence as the pair dueled for the spot, somehow avoiding collision at the exit of the second corner.

Wolfe was scored as second with six laps to go and continuing to ride his high side rough patch through the first and second turns, he closed the gap on Starks for the win.

Starks meanwhile was running the wheels off of his No. 44 but Wolfe was surging during the final laps.

Wolfe used a run off the outside of the fourth corner to draw to Starks inside as the pair raced into the first corner with four laps to go, catching Starks by surprise while squeezing his car into the narrowest of spaces remaining to the leader’s inside.

Wolfe’s turn one move caused Starks to twitch as he set his car into the corner in order to avoid what could have been another potential catastrophe in the event while it also allowed Wolfe to shoot through the hole he had created going into the corner and head to the victory.

Through traffic to the finish, Wolfe took his fifth career victory at the oval by 2.112 seconds.

The victory was also the biggest in decades for car owner Michael Barshinger who formerly had fielded cars for Cory Haas, Johnny Mackison Jr., and others.

Barshinger equated the win to his 1991 victory in the Selinsgrove Speedway National Open.

Starks held on for second over Dylan Cisney, Danny Dietrich and Aaron Ott.

Heats run on Sunday for the event went to Lucas Wolfe, Danny Dietrich and Dylan Cisney with Dale Blaney setting fast time on Sunday with a lap of 16.270 seconds.

Hodnett won the dash to earn the pole for the feature event.

Dewease started sixth in the seventh in the 15-lap 410 sprint dash with second starter Mike Wagner taking the lead at the start.

Dewease steadily marched through the field to take third behind Greg Hodnett on the fifth tour before muscling by Wagner for second with five laps to go.

Saturday night’s feature winner at the track, Dewease ran down leader Wagner and took over control with two laps to go to pick up the $1,500 winner’s share while also establishing a new 15-lap track record in the process.

Greg Hodnett started seventh in the field and drove up to third on the first lap before getting around Esh for second with 10 laps to go.

But by that time, Ott was well ahead of the field and ready to take the win however a yellow flag with six laps to go changed the race via a double file restart with Hodnett lining up to Ott’s inside.

Hodnett go the jump on Ott when action returned and jetted away with control to pick up his first ever URC win at the track while 10th starter Chuck Hebing of New York worked through the field to garner a fine second.

Doug Hammaker earned a $500 bonus as the highest finishing 358 sprint in the race, sponsored by Racers Used Parts Warehouse.

The URC dash found second starter Curt Michael leading all 15 laps to pick up the $1,000 paycheck.

Doug Hammaker chased him throughout while Chuck Hebing put on a show from the seventh starting spot.

He got as high in the field as second at one point but Hammaker was up to the challenge, forcing him to take a third place finish.