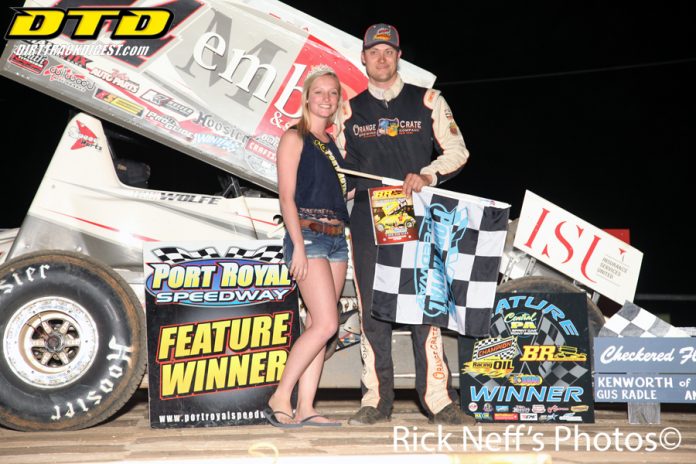 The win was Wolfe’s second in as many days after having also won on Friday night at Williams Grove Speeedway and accounting for his win last Monday at Port Royal in the Bob Weikert Memorial, the win at Williams Grove and again at Port Royal on Saturday, Wolfe pushed his six-day accumulated total earnings to $17,000 in 85 total feature laps.

In the 40-lap super late model speedweek main, Jeff Rine of Danville notched the victory after overpowering a 39-car field for the $4,000 victory.

To close out the night, Bill Powell claimed the xtreme stock main event.

Wolfe started second in the 410 sprint car main and was trailed by polesitter Blane Heimbach early as he entered the backmarkers on the eighth lap.

Setting a blistering pace around the big half-mile, Wolfe was annihilating the field, a bit more than a half lap ahead of second place Brock Zearfoss on lap 12 when the only caution flag of the race unfurled.

Prior to the caution, Wolfe had a whopping 7.1 second lead over Zearfoss.

Zearfoss took second from Heimbach on the 10th tour but hadn’t been able to close on Wolfe at all.

The restart saw eighth starter Danny Dietrich up to fourth and Dietrich continued his march forward, taking third on the restart and second from a rebounding Heimbach with nine laps to go.

Wolfe didn’t check out nearly as much during the final stages as Dietrich was at least able to keep him in sight, finishing 3.212 seconds behind at the finish.

A fantastic run from the 14th starting spot for Dylan Cisney excited the fans as the Port Royal driver mustered up to third before the checkers could fall.

With the finish, Cisney took a narrow lead in the season point standings over Esh.

Heats went to Stutts and Dietrich.

Rine took the lead from Coleby Frye with a two-car pass on the 14th lap of the super late model feature.

Polesitter Coleby Frye took the lead when the feature bean over Kyle Hardy with fourth starter Rine running third on the first lap.

Hardy made a brief charge for the lead on the ninth tour, getting around for the top spot in the middle of the fourth corner before Frye used his momentum to reclaim the lead as the pair crossed the stripe.

On the 12th tour, Frye brushed the outside wall but stayed under power with the lead and by that time, in heavy traffic, Rine was knocking on Hardy’s door for second.

Rine briefly got second on the 13th tour only to see Hardy race back in front but as both Frye and Hardy got jammed up in traffic trying to pick their way through, Rine stuck his No. 2J low through the third and fourth turns and made a two-car pass of both drivers to net control with 26 laps to go.

The leader saw a 1.3 second lead erased on the 22nd lap with Jason Covert now up to third and with the track cleared, Rine jetted away on the restart leaving everyone else to battle for the top five.

Seventh starter Mason Zeigler blasted from fourth to second for a short time with 11 laps to go only to find Covert, Frye and Kenny Pettyjohn battling him for the spot.

Zeigler was in a solid third with 10 laps to go and although he threw everything he had at Covert for second he couldn’t quite take the spot.

Covert finished 6.139 seconds behind at the finish followed by Zeigler, Pettyjohn and Frye.

Twin consolations went to Scott Flickinger and Haus with Frye setting fast time with a lap of 19.229 seconds.

Rine likened the victory in the speedweek main equal to any of his biggest wins at any track, taking note of the quality field in attendance.

Powell started seventh in the field and took the lead on the fifth lap.

It was Powell’s 25th career win in the division.