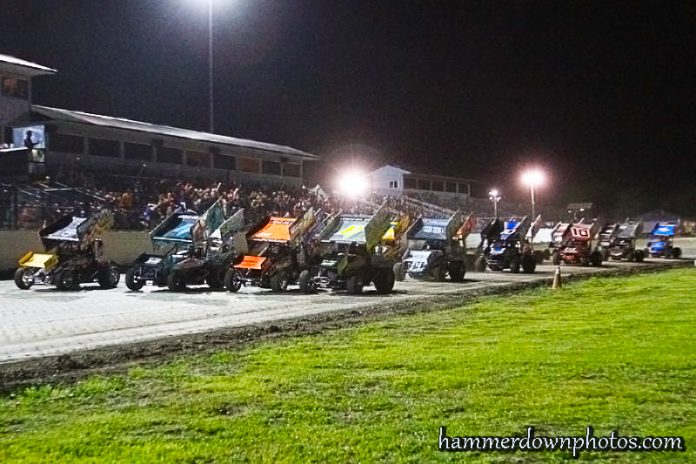 AKWESASNE, NY – After 3 weeks of regular season action the first special event of the 2017 season is set to take place as the Empire Super Sprints will make their first and only appearance of the year at MIR.

Jason Barney leads a quality field in to Friday night’s program but some up and coming stars will be chasing this season’s only 2 time winner. The most recent event at the Cornwall Motor Speedway Jordan Poirier led an all Quebec top 3 and dominated the field en route to his first career ESS victory. Another driver who’s one to watch is Coleman Gulick, the Binghamton New York native claimed the victory last Friday in Granby and will be among the many stars gunning for another checkered flag.

Defending series champion Steve Poirier is always a threat to win at Mohawk leading all competitors with 7 wins and by the way, is the defending race winner. After struggling last Sunday in Cornwall Jeff Cook will also look to get back to his winning ways. Cook is 2nd on the list of winners at MIR with 3 wins with his last win coming in 2014.

Off a big win last Friday night Corey Wheeler will have 1 more week to enjoy it as the 358 Modified division has the night off but a full show in Sportsman, Novice Sportsman, Mod Lite and Bandit will all join the card making for an exciting night of racing.

Gates open at 4:00pm with Canadian money accepted for the entire month of June at the front gate only. $20 general admission, Seniors and students $15, children are always admitted free. Pit admission is $32 with a DirtCar membership $35 for non members. The first green flag flies at 7:30pm. For more information log on to www.mohawkspeedway.com or contact the speedway office at 1-518-358-9017.