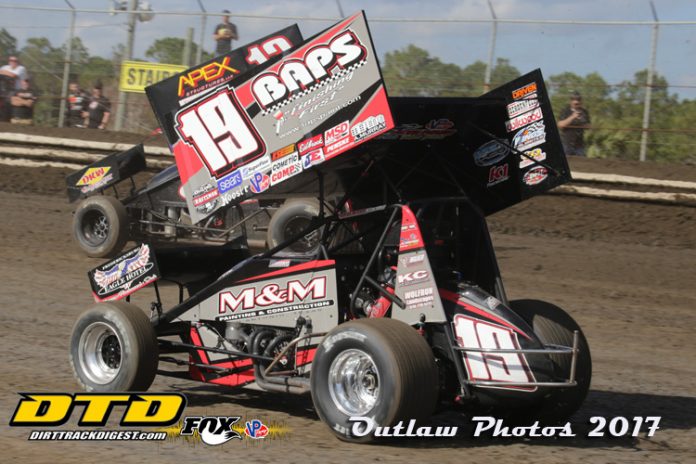 GRAND FORKS, ND – The 1st Leg of the Gerdau Recycling Northern Tour for the World of Outlaws Craftsman Sprint Car Series at River Cities Speedway in Grand Forks, N.D., is just around the corner on Friday, June 16. The 2017 season will mark the 11th consecutive year that the series has visited the always thrilling high-banked bullring.

Last year, defending series champion and North Dakota native Donny Schatz swept both rounds of the Gerdau Recycling Northern Tour at River Cities Speedway. In June, he took the lead from Logan Schuchart on lap-21 and would stay out front for the remainder of the 40-lap contest. In August, Schatz started on the pole and led all 40 laps to become the first driver ever to lead flag-to-flag in a World of Outlaws Craftsman Sprint Car Series race at River Cities Speedway.

Schatz is the winningest driver with the series at the track with eight victories, including four straight and five of the last six. He will do double duty that night as he also will race his late model with the NLRA (Northern Late Model Racing Association).

Leading the way into River Cities Speedway again this year is Schatz, who has nine victorious. David Gravel is just behind him with eight wins and sits second in points. Brad Sweet, who has three victories, including in the recent Jackson Nationals, is just two points behind Gravel. Pittman is currently fourth in the standings as he chases his first win of the season, with Shane Stewart, who has two victories thus far in 2017, rounding out the top-five.

Jason Johnson, the reigning Knoxville Nationals winner, has a pair of wins and is sixth in points. Sheldon Haudenschild, the leading contender for the Kevin Gobrecht Rookie of the Year Award, sits seventh in the standings, with Schuchart, who has three wins, in eighth, Saldana in ninth and Jason Sides in 10th.

Also on the road again this season are veteran drivers Paul McMahan, Kraig Kinser and Greg Wilson. Among the young drivers travelling with the Outlaws are Jacob Allen, Clyde Knipp and rookie Brent Marks.

Tickets for both legs of the Gerdau Recycling Northern Tour for the World of Outlaws Craftsman Sprint Car Series events at River Cities Speedway on Friday, June 16 and Friday, August 18 can be purchased online at slspromotions.ticketforce.com or by calling 815-344-2023. Tickets can also be purchased at the River Cities Speedway track office, area ticket outlets and at the track on race day.