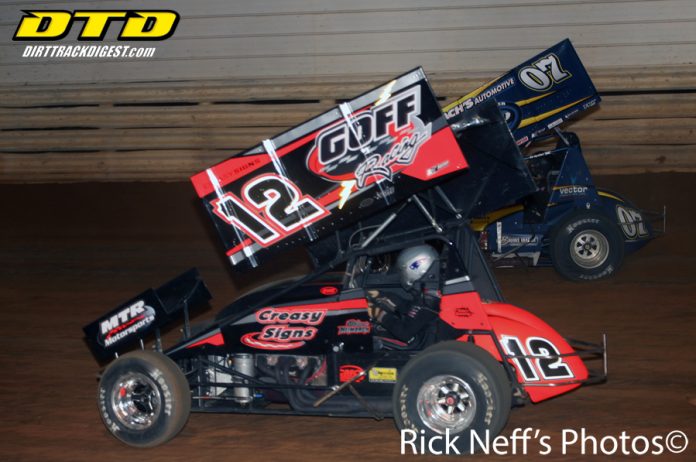 A one-time winner in his career at Port Royal, Ballou started second in the Eastern Storm USAC feature for the wingless sprint cars and outpaced polesitter Chad Boespflug from the beginning.

Windom started third in the field and maintained that spot for the first five laps before Boespflug started slipping.

A caution flag for debris regrouped the field and wiped out a 2.1 second lead that Ballou had built over Windom and sixth starter Thomas Meseraull.

Ballou got away again when action resumed and had a 1.15 second lead at the halfway point that was extended to 2.813 by the time that a second caution flag unfurled with four laps to go.

And that was the break that Windom needed to get the lead.

When the green flag came back out, Windom pounced to Ballou’s inside as the pair raced into the first corner and with that Windom slid up to the cushion just in front of Ballou to begin his run at the front.

Windom was seemingly home free, headed for the checkers but the race for second and third really intensified during the final four laps and with Ballou trying to hang on to second, both he and Justin Grant collided.

The night’s fast timer, Grant and Ballou exchanged second twice before racing into the third turn on the final lap with Grant on defense having secured the spot.

Ballou however went for a big slide job as the pair entered the third turn only to find Grant blocking and that sent Ballou up to the fence and flipping, bringing out the red flag.

Grant restarted second for the final lap and tried to challenge Windom but Windom kept to the low side to block Grant in each turn, preserving his first ever Port Royal victory, worth $6,000.

Heats for the 28 USAC sprints went to Ballou, Meseraull and Golobic with Darland scoring the B Main.

The initial start was red-flagged when Joey Hershey turned over in the third turn, collecting Curt Stroup and TJ Stutts.

After the stoppage, the event went non-stop to the finish with leader Taylor entering the backmarkers with 15 laps to go.

Taylor kept nearly a straightaway between himself and pursuer Heimbach for most of the event but with less than 10 laps to go, Heimbach began chewing into the lead.

It was clear with five laps to go that Taylor was losing speed in the third and fourth turns while Heimbach was gaining with every tour.

It took until lap 23 for Heimbach to finally take advantage of a slipping Taylor when he was able to ride the inside lane underneath Taylor for the lead as the pair headed for the two-to-go sign.

Taylor came back for a brief moment in the first turn as Heimbach rolled the top  and Taylor tried getting back by with an low side move.

But Heimbach dropped off of the cushion to again take control and run to the finish by .944 seconds, worth $3,200.

Heats went to Stutts and Heimbach.

PRS 2017 – Racing through a new decade with a new attitude! 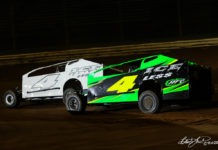