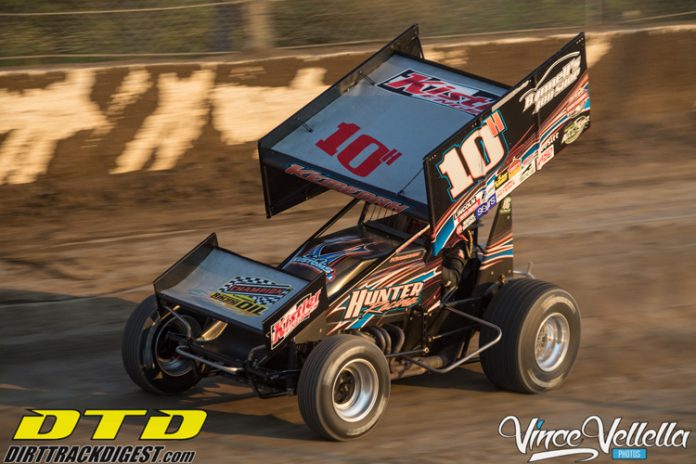 The Eldora event, the second of eight races scheduled across Ohio in nine days, is presented by Casey’s General Store. Long known for their support of sprint car and dirt track racing throughout the Midwest, Casey’s has expanded east into Ohio with three recently-opened locations at Ansonia, Cridersville and Fort Loramie and soon-to-be-opened locations in Union City and Jackson Center.

Introduced in 1983, by Eldora founder Earl Baltes, Ohio Sprint Speedweek has been a staple on the sprint car schedule in the Buckeye state since. While the participating speedways and length of the grueling week has varied over the years, Speedweek remains a focal point on the national Sprint Car scene. The idea was ignored by many when introduced, but now nearly every sanctioning body in the country has copied the idea and has a “speedweek” of their own.

“Sprint car racers and fans alike look forward to Ohio Sprint Speedweek each and every year. It’s grueling. It’s long. It takes a lot of sweat, hard work and dedication, but I’m sure the racers wouldn’t have it any other way,” Tony Stewart, owner of both the Arctic Cat All Star Circuit of Champions and Eldora Speedway, said. “I want to thank all of the tracks and other organizations for helping us put this together, especially Cometic Gasket. The amount of support Ohio Sprint Speedweek attracts is overwhelming. I’m confident this will be around for another 35 years.”

Drivers and fans alike have always highlighted the Eldora stop as one of the best on the Speedweek trek that criss-crosses the state. A year ago, “The Wild Child” Jac Haudenschild (Wooster) took the lead just past the half-way point to capture his 10th career All Star Circuit of Champions win at Eldora. Haudenschild is expected to return on Saturday night where he will try to tie Joey Saldana (11 wins) for 2nd-place on the All Star win list at Eldora.

Chad Kemenah (Findlay), who claimed his second Ohio Sprint Speedweek title a year ago as well as his fifth series championship, finds himself back atop the Arctic Car All Star point standings and has a series-high three wins heading into the Speedweek opener at Attica Raceway Park on Friday evening. Kemenah has four career wins at Eldora including his most recent in the 2015 season finale.

Tony Stewart has won races in nearly every form of motorsports but is still looking for his first Eldora win behind the wheel of a winged 410-cubic inch sprint car. After a strong third place run in last month’s Little 500 and a fifth-place run at Macon, Illinois, Stewart will make his return to Eldora’s high-banks on Saturday night.

Other expected entrants include two-time Chili Bowl champion Rico Abreu (St. Helena, California), who has two career wins at Eldora including the most recent ASCoC event at Eldora last fall. Former Knoxville Nationals champion and five-time ASCoC champion Tim Shaffer (Aliquippa, Pennsylvania), who is still looking for his first All Star win at Eldora is expected to take on the All Stars as well as second generation drivers Lee Jacobs (Dalton) and Cole Duncan (Lockbourne). Recent World of Outlaws Craftsman Sprint Car Series winner Parker Price-Miller (Kokomo, Indiana), and Spencer Bayston (Lebanon, Indiana), driving for Kevin Swindell, are expected to add some Hoosier flavor to the event while Chapin, Illinois upstart Paul Nienhiser has indicated he plans to be at Eldora.

Ohio Sprint Speedweek at Eldora presented by Casey’s General Store will open the gates to spectators on Saturday at Eldora at 4 p.m. with hot laps scheduled for approximately 6 p.m. Showtime is 7:30 p.m. Adult general admission tickets are still just $20, the most affordable of the week, with children (12 and younger) admitted free.