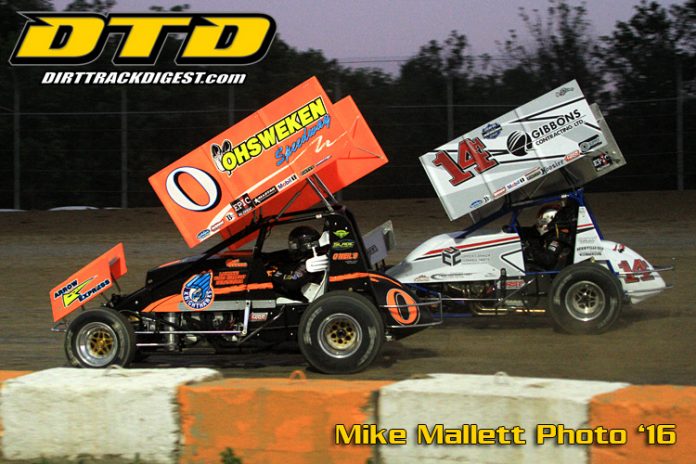 The night will honour the late Frankie Turkey, track owner Glenn Styres’ uncle, who passed away following a car accident at just 27 years of age. Frankie introduced Glenn to auto racing at a young age, and remains an inspiration for many parts of Glenn’s business – including the track’s trademark orange.

Several media members will also be in attendance for Media Appreciation night. Members of the local media will have the chance to take the ride of their life in Ohsweken’s unique two-seat Sprint Car. They’ll also have the opportunity to sample the track’s delicious menu choices, including Pinty’s Chicken Fingers and Boneless Wings, Eataly subs and Wally Parr Sausages.


Kool Kidz-Corr/Pak 360 Sprint Cars
Dylan Westbrook continued his winning ways last week when he used a late restart to take the lead from Jim Huppunen and drive off to his second challenge race victory of the season against the Southern Ontario Sprints. Weekly racing resumes this week with Westbrook still holding a narrow two point advantage over Huppunen at the top of the standings. Cory Turner is third in the standings just 17 points back of the lead while Ryan Turner and Mikey Kruchka round out the top five.

HRW Automotive Mini Stocks
The HRW Automotive Mini Stock drivers will have double features this week. Last week’s Feature was interrupted after just three laps. That race will pick-up from that point and will be the first race of the night this week. Drivers will then begin a brand new event and qualify for the night’s Feture through normal procedures. So far this season, the division has seen four different winners in as many races, with rookie driver Nick Masi the most recent victor after he picked up a win on June 16. Entering the night, Mark Bazuin is the point leader with just a seven-point advantage over Jon Jansses. Brandon Crumbie, Brandon Janssens and Aaron Rewutzsky complete the current top-five.

Strickland’s GMC Crate Sprint Cars
The Strickland’s GMC Crate Sprint Car division will look to thrill again when they hit the Ohsweken clay again this week. Shone Evans drove his No.87x to Victory Lane, leading every lap for his first career win. Jesse McDonald is the new high point man in the championship standings after Mack DeMan suffered mechanical problems and was unable to finish the main event last week.

Middleport Mechanical Thunder Stocks
Dave Bailey continues to be the measuring stick in the Middleport Mechanical Thunder Stock feature as the Hagersville, Ont. driver raced to his fourth win of the season last week. Ryan Dinning, who also as a win this season, earned another strong second-place finish. The two drivers have waged an exciting battle all season long, including an instant-classic finish back on June 16 when the margin of victory was just 0.005 seconds. They’ll both have their hands full again this week though with weekly top-five contenders Ken Sargent, Jim Lampman, Dereck Lemyre and Trevor DeBoer all hungry for a parking spot in Victory Lane.

Gale’s Auto Aftermarket Bombers
The Gale’s Auto Aftermarket Bombers are also excited to return to action after one of their most exciting races of the season. Point leader Lucas Smith won from the 17th starting spot last week, but had to outduel a number of tough competitors who are fighting to take over the top spot in the standings. He’ll have to contend with the likes of Gillians Hils, Paul Longboat, Dustin Longboat, and Alex and Jake Mass, to name a few.

About O’Neil’s Farm Equipment Case IH: O’Neil’s is the official track maintenance equipment provider of Ohsweken Speedway, and takes pride in being a family-owned business serving their community since 1918. A lot of things have changed over the years, but the principles of their dealership have stayed the same – They believe in serving their customers with honesty and integrity. Their roots were founded in the agriculture business, selling and servicing IH, Case IH, and Case equipment. As their dealership has grown, they have expanded by taking on quality lawn and garden products, and offering a hardware store. Visit the Case IH/O’Neil’s Farm Equipment website at www.ONeils.ca or visit the O’Neil’s Lawn & Garden store at 2461 Hwy 56 in Binbrook, just 20 miles from Ohsweken Speedway.