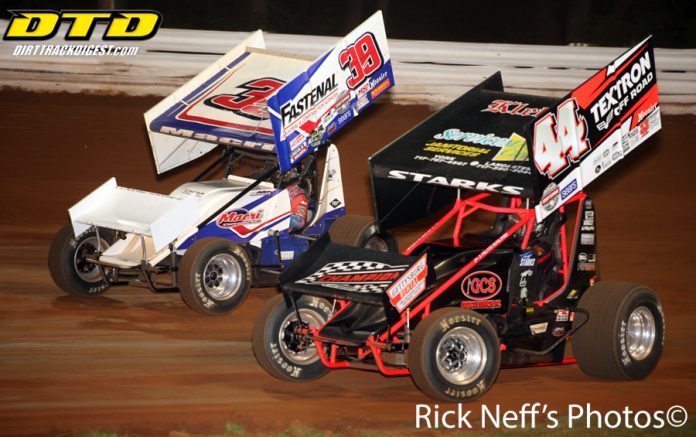 Starks wired the field for his first career Williams Grove victory that came in the biggest race to be run in the 27th annual Pennsylvania Speedweek Series for 410 sprint cars.

Originally slated to start third in the field, Starks slid to the pole in the 30-lap Smith Memorial when the initial start was called back and the first and second rows were swapped for the next attempted start.

Only one caution period slowed the race pace, after just the first lap was completed, when Rodney Westhafer stopped in the fourth turn.

The final 29 circuits went non-stop at a dizzying pace on the lightning-fast surface that was wetted by a late day shower.

Aboard Scott Gobrecht’s No. 44 machine, Starks had amassed a straightaway lead over the field by the seventh circuit and he entered the backmarkers just one tour later.

Matt Campbell tried to keep Starks in sight during the early going but it took traffic for Campbell to narrow the gap, which he did to a one-turn advantage with one-third of the race completed.

But Campbell would succumb to the advances of Brock Zearfoss at the halfway point and then Zearfoss gave Starks his only challenge of the event when he was able to sneak in amid heavy and hectic traffic with 11 laps to go.

Zearfoss had been able to dial in the leader as Starks tried repeatedly to work the outside lane to put cars a lap down but after nearly flipping his sprinter on more than one occasion as he thundered through the corners, Starks pulled back to the inside and instead chose to bide his time, looking for opportunities to move forward on the low side.

And that strategy proved to be a winning one for Starks who then was able to open up another sizeable lead during the final eight laps, pulling out to another straightaway advantage at the finish.

Ott moved into third with nine laps to go but failed to mount any further challenges.

Justin Weaver of Williamsport, Md., was able to pull off a last lap, last corner pass for the win in the Mason Dixon Shootout feature for limited late models.

Weaver moved into second on the fourth lap of the 20-lap main and raced door to door with leader Derrick Quade for the final 10 laps of the event.

Quade was scored the leader from the beginning thorugh the 11th lap before Weaver nosed ahead at the line with eight laps to go.

But the next time around Quade had turned the tables and had the lead again at the line but it was a hard fought lead that Quade was holding onto.

Weaver repeatedly got to Quade’s inside in the corners and at times would nose ahead only to have Quade be scored the leader at the line.

But on the final corner of the final lap, Quade bucked just enough on the cushion to allow Weaver enough room to pull ahead to a narrow victory as the pair crossed the finish line side by side with Weaver’s nose first to hit the finish line.