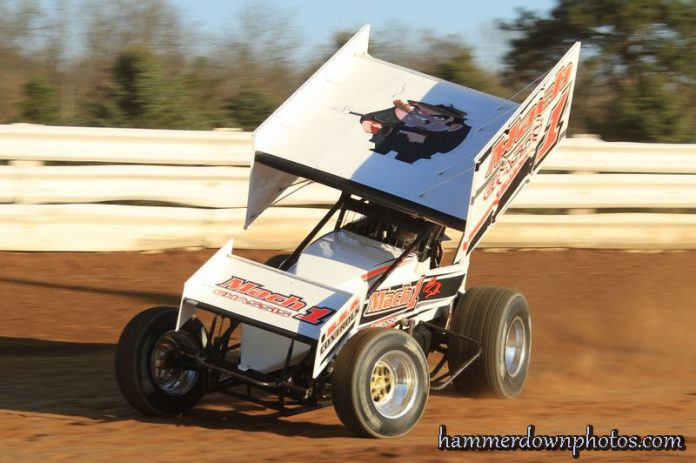 The special night did not disappoint. A large crowd witnessed some of the best racing of the season on a great racing surface that produced plenty of wheel-to-wheel racing and a new 25-lap track record by Hayes Mattern of Beavertown in the super late model main event.

In the thrilling 360 sprint car main event, Adam Carberry was trading slidejobs in lap traffic with Mark Smith with Eric Tomecek lurking in the wings.  Young Carberry had just secured the top spot with four to go from Smith off turn two when his car made hard contact with the outside wall ending his bid for his first Selinsgrove Speedway win.

Smith, who started tenth, timed his restart perfect to break away from Tomecek on his was to his third win of the season. Tomecek was second followed by point leader Davie Franek who started 12th on the racy half-mile surface.

In your best Tom Carnegie voice, “It’s a new track record!” for Hayes Mattern in the Jeff’s Auto body Super Late Models. It was Kenny Trevitz out front for the first half of the feature before Mattern moved to the lead on lap 11. Mattern had to maneuver through lap traffic while Trevitz and Jeff Rine dueled for the second spot. Rine soon secured the second spot and began to catch Mattern for the lead.

Mattern kept the advantage over one second for the remainder of the event on his way to his third win of the season in the Late Models. Rine was second followed by Trevitz, 11th starting Gene Knaub, and Bryan Bernheisel.

Kurt Wray broke away from a six car, race long battle for the second spot. Wray went unchallenged for much of the A&A Auto Stores Pro Stock feature. Curtis Lawton held second for a majority of the race before Dustin Snook snuck by. Snook started in 16th.

Tommy Slanker moved into third when Curtis Lawton and Shaun Lawton both made contact with the outside wall on the final laps of the race. AJ Hoffman was also able to get by for fourth.

After post race inspection was complete Wray’s car was deemed illegal and Snook was awarded the victory. It was his first in the Pro Stock class.

Bob Bussey led the whole race for the Roadrunners on Saturday night on his way to his third win of the season. Bussey held off point leader Will Brunson just past half way. Bussey’s win came over Ken Scheffler, Smith Cope, Tom Underwood, and Kyle Kissinger.

Next Saturday night the 360 Sprints will be joined by the Pro Stocks, Roadrunners, and the Moonshine Camo Route 35 Challenge Series for the Super Late Models. It is also Sunbury Eagle Club night. Racing begins at 7:30.