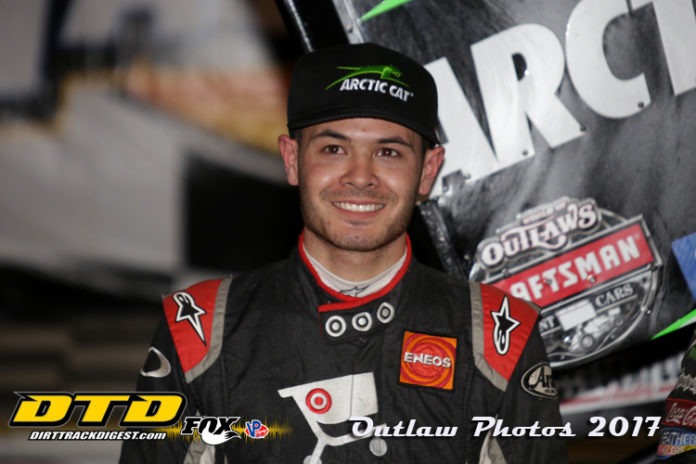 OHSWEKEN, ONT – Ohsweken Speedway is excited to welcome Monster Energy NASCAR Cup Series multi-time winner Kyle Larson for two big nights of Sprint Car racing at the 3/8-mile clay oval on Monday July 24 in the Burger Barn Northern Summer Nationals and Tuesday July 25 in the Arrow Express Six Nations Showdown for the World of Outlaws Craftsman® Sprint Car Series. Ohsweken officials are, however, disappointed to announce Rico Abreu has withdrawn from his commitment to race at both events.

“Due to recent personnel changes within Rico Abreu Racing, we’re unable to participate in the upcoming races on July 24-25 at Ohsweken Speedway,” Rico Abreu said in a statement. “This has impacted our preparation for these events. We realize not being able to appear at Ohsweken Speedway will be disappointing to the fans who already purchased tickets to see us race, but we hope to be in Canada to race at Ohsweken next year.”

“To say we are disappointed in an understatement,” said Ohsweken Speedway General Manager Clinton Geoffrey. “We were shocked to hear about this turn of events. Our management staff at Ohsweken immediately contacted Kyle Larson’s team who have confirmed that he will be ready to compete on Monday and Tuesday.”

Despite Abreu’s absence, Ohsweken officials are pleased to confirm that four-time Knoxville Nationals champion ‘The Dude’ Danny Lasoski of Dover, Missouri will drive a Hoddick Racing entry for both events. In addition to his four Knoxville crowns, three of which came with Tony Stewart Racing, Lasoski is also a former full-time World of Outlaws competitor who is seventh on the Series’ all-time win list with 90 Feature victories.


A healthy contingent of local and Northeastern stars will be in attendance for both shows to battle with Larson. The hottest 360 Sprint Car driver in the Northeast and current Ohsweken Kool Kidz-Corr/Pak Sprint Car point leader Dylan Westbrook will try to defend his home turf against Larson. Lucas Oil Empire Super Sprint point leader Jason Barney has also confirmed his attendance and plans to hunt down Larson for the third Ohsweken win of his career.

The following the night, the stars of the World of Outlaws Craftsman Sprint Car Series roll into town for the 11th straight season. Eight-time and defending Outlaw champion Donny Schatz of Fargo, ND will be gunning to repeat his 2016 victory and continue on the lucrative pace he has set to start Sprint Car racing’s Month of Money.

Full-time Outlaw and former Canadian Sprint Car Nationals winner Shane Stewart of Bixby, OK will also be a top contender when he unloads his Larson Marks Racing No.2. Stewart will look to upset his boss, Larson, for the victory at the Big O. In addition, Dylan Westbrook will get his chance to show the Outlaws the fast way around Ohsweken as he will have a 410ci motor under the hood of his popular No.47x.