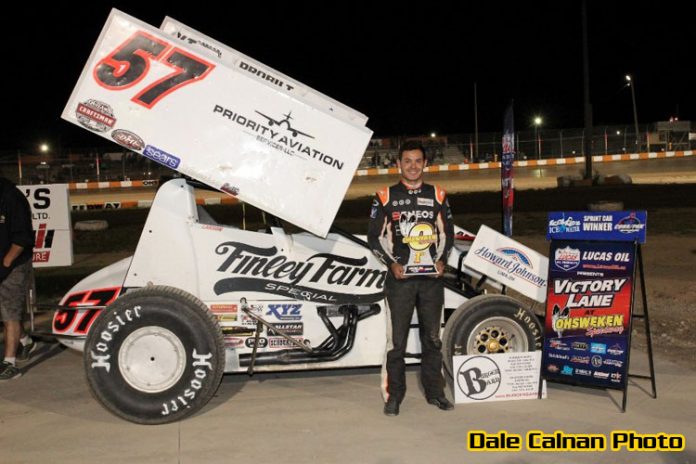 When the checkered flag waved, it was Larson who claimed the win after a spectacular duel with Parker Price-Miller. Holly Porter scored a $1000 victory in the Ackland Insurance Clash of the Crates for the Strickland’s GMC Crate Sprint Cars, Ryan Beagle scored his first ever Middleport Mechanical Thunder Stocks win in the 50-lap Brock Leonard Memorial and Joel Dick completed the sweep of UMP Modified competition at Ohsweken in 2017 with his second win of the year.

Kyle Larson started on the front row with Mitch Brown for the Kool Kidz-Corr/Pak 360 Sprint Car main event. Many had Larson, an Elk Grove, Calif. native pegged to lead flag-to-flag, but Brown quickly changed the conversation when he led the opening lap.

Third-starting Parker Price-Miller of Kokomo, Ind. quickly made it a three-car battle for the lead while Larson retook the point on lap two. Price-Miller drove low into turn one and slid up in front of Larson in turn two to take the lead only to have Larson turn back underneath and lead on corner exit. Price-Miller didn’t make the same mistake twice as he executed a slidejob in turn four to take the lap three lead.

“I knew he’d be good,” Larson said of Price-Miller in Victory Lane. “I’ve watched videos of him and he’s been really good here. His car had a lot of grip all night. I knew he’d be the one I’d have to beat. He got to the lead really quick and was ripping really hard up top.”

From there, the dynamic top two pulled away from the rest of the field and worked into traffic by lap seven. On lap nine, both cars were caught behind slower traffic and had to alter their preferred lines. Price-Miller ran the top wherever possible, while Larson stumbled upon a fast bottom lane.

“ It started getting really slick and slow off four and I actually made a mistake on the backstretch and ran the bottom on accident because I almost clipped the wall,” Larson said. “I gained time on him so I was like ‘okay, we can run down there’. Once we got to traffic I was able to work it and get by him on the bottom.”

Larson made what ultimately turned out to be the winning pass in traffic when he returned the slidejob in turn two and took the lead from Price-Miller for good. He was able to pull away on lap 16 when Price-Miller missed his entry into turn three in the top groove, but the lapped traffic forced Larson to remain sharp.

Larson took the white flag out in front of the field and raced down the backstretch to the checkered flag, but the caution waved for the first time before he could claim the win when Tom Huppunen spun at the top of turn three. A one-lap dash settled the finish and Larson ran the top perfectly to claim the win.

“It’s an awesome racetrack,” Larson said. “This is one of the most fun tracks I’ve been to. It’s super slick, technical. The moisture was basically off the track, so you had to find that. I had a lot of fun racing with Parker.”

Price-Miller, the reigning Canadian Sprint Car Nationals winner after his victory last September, was happy with his second-place finish but was clear he aspired to beat the NASCAR star. Price-Miller returned to action in the Hill’s Racing No.67x after he was involved in a wreck on Friday night where he suffered a minor injury to his wrist.

“I really wanted that one just because Kyle’s the best there is out there and it would be really cool to beat him,” Price-Miller said. “My guys gave me a great car and they fixed a lot of stuff from Friday night. I’m still a little soar and my arm kind of gets banged up racing, but you don’t think about it. It’s still a good night, but I like to win. We’re always good at Ohsweken, so we’ll try again tomorrow with the 410.”

On the final lap, the battle for third shook up the finish. Brewerton, NY driver and current Lucas Oil Empire Super Sprint point leader Jason Barney restarted in third, but was involved in contact with Dylan Westbrook in turn one. Barney suffered a flat tire and damaged wheel, but limped the car to a ninth-place finish.

Westbrook was able to avoid serious contact and finished third. With the third-place finish, the Scotland, Ont. teenager’s six-race win streak at Ohsweken was snapped.

“I’m not sure if he caught the wall first or if he slowed down real quick and I couldn’t get on the brakes quick enough to get around him,” Westbrook said of the last lap collision. “It kind of sucks. I think he probably would have beat us, but it’s still good to come home in third.”

Westbrook is now set to make his first start with the World of Outlaws Craftsman® Sprint Car Series in the Arrow Express Six Nations Showdown on Wednesday night.
“I’m really excited. It’s going to be my first time ever in a 410,” Westbrook said. “It’s going to be a really cool experience, so we’ll have some fun with it and hope for the best.”

Brown finished in fourth while Bradford, Pa’s Jared Zimbardi rounded out the top-five. Ryan Susice was the Hard Charger of the race. He advanced from the dead last starting position, 24th, to finish 6th.

PORTER SCORES WIN IN ACKLAND INSURANCE CLASH OF THE CRATES

The Strickland’s GMC Crate Sprint Cars faced a unique, special event format for the Ackland Insurance Clash of the Crates. The field was split into two groups and Timed Hot Laps set the field for twin 15-lap Features. The top-four finishers in each Feature qualified to the 8-lap, $1000-to-win Clash of the Crates. Shone Evans and Holly Porter set fast times in their respective groups to gain the pair of pole starting positions.

In the first Feature, Evans grabbed the early lead despite a trio of early cautions. When the race hit full speed, Evans stayed up front until Mack DeMan took the lead off a lap seven restart. DeMan pulled away to half straightaway lead until the caution waved on the final lap. DeMan was perfect again on the restart to claim the win over Evans, Ryan Hunsinger and Jesse McDonald.

The second Feature brought a thrilling battle up front between Porter and second-starting Mike Thorne. The two drivers raced side-by-side, exchanging the lead several times, until lap 11 when Porter was forced to brake behind a car about to be lapped. Thorne was able to pull away by eight car lengths to drive off to the win ahead of Porter, Michael Summer of Warsaw, Ind. and 15-year-old rookie Josh Hansen of Beamsville, Ont.

The eight-driver Clash of the Crates rolled on to the track before the main event for the Kool Kidz-Corr/Pak 360 Sprint Cars. Thorne grabbed the lead from the pole, but DeMan attempted a slidejob in the opening corner to try and take over the point. Thorne evaded the action to lead the opening lap before Porter got by both driver to take the lead on lap two. At the halfway mark, Porter had gained a half straightaway advantage and maintained it to the finish to score the $1000 payday ahead of DeMan, Hunsinger, Thorn and McDonald.

The Middleport Mechanical Thunder Stocks ran their longest and most prestigious race of the season in the Brock Leonard Memorial. The race also saw several out of town drivers in attendance for the race, which doubled as the first round of the Duel on the Dirt series.

Third-starting Ryan Dinning drove to the lead on the opening lap after Dave Bailey and Jay Liverance had brought the field to the green flag. Liverance battled early for second with Frankie Turkey Jr. until Turkey’s car broke on lap 10 to bring out the first caution.

On the restart, Ryan Beagle battled door-to-door with Dinning for the point position and eventually wrestled it away on lap 17 and cleared Dinning one lap later. A lap 18 caution slowed the race again and allowed Dave Small to make his move forward.

Over the next 32 laps, including on a lap 36 restart, Beagle continuously fought off Small’s challenges which routinely saw him try to cross lanes behind Beagle, who was married to the bottom lane. With six laps to go, Small’s move nearly worked when Beagle slipped half a groove in turn four, but the young driver recovered in turn one to break Small’s momentum and hold the lead.

The DIRTcar UMP Modifieds were back at Ohsweken for their second visit of the year. The field was composed entirely of drivers who race primarily at South Buxton Raceway located in Merlin, Ont. After Joel Dick of Leamington, Ont. and Joe Brosseau of Merlin, Ont. won qualifying heats, the two drivers lined-up on the front row for the 20-lap main event.

Dick got an excellent jump off the initial start and left Brosseau to battle Tim Richardson of Comber, Ont. for second. A pair of cautions on laps five and seven were the only thing that slowed or challenged Dick as the veteran driver dominated the main event. Dick had no issues navigating through slower traffic over the final five laps and drove to the win by over six seconds to complete the sweep of UMP Modified events at Ohsweken in 2017.

Brosseau earned a hard-fought runner-up spot ahead of Blenheim, Ont.’s Brian Speelman. Richardson and JJ Beaulieu of Chatham, Ont. rounded out the top-five.

Ohsweken Speedway returns to action on Tuesday, July 25 for the Arrow Express Six Nations Showdown featuring the World of Outlaws Craftsman® Sprint Car Series. The DIRTcar Sportsman tour Western Region will also be in attendance along with the HRW Automotive Mini Stocks. Race time is 7:30pm, with hot laps and time trials taking place beforehand. For a full schedule of events, visit www.ohswekenspeedway.com. Excellent seats are still available at https://ohswekenspeedway.ticketforce.com.