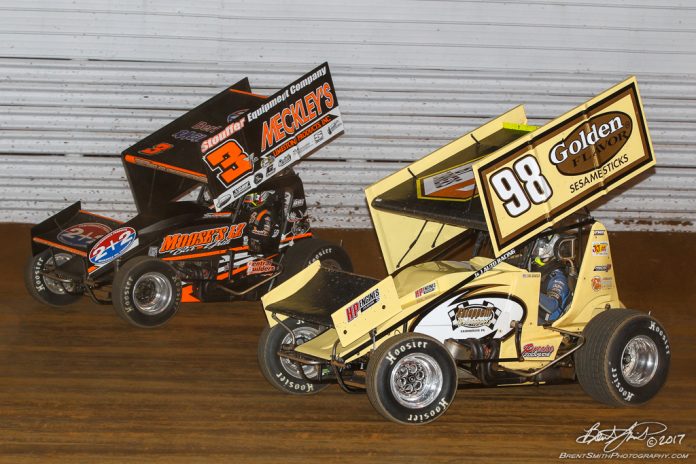 In the 25-lap super late model main, Danville’s Jeff Rine raced to his fourth win of the year, pushing himself up the all-time win list to a total of 17 at the oval.

And in the 305 sprint main, Jeff Miller of Huntingdon scored for the second time this season while Kevin Imes won the xtreme stock feature.

Sheaffer would set the race pace ahead of Esh for the first six laps before the only caution flag of the event unfurled for a Flick flat tire.

The restart placed sixth starter Zearfoss in second with Esh third and Lucas Wolfe in fourth.

Zearfoss came to second on the fifth tour after a big move to thwart Lucas Wolfe, who had been to his inside for position in the third corner only to see Zearfoss slam the door to keep him behind.

Sheaffer failed to succumb to Zearfoss when action resumed but Zearfoss proved too much to handle as he buzzed the top time after time until finally getting around for the lead in the fourth turn with 15 laps to go.

Wolfe raced into second with 12 laps to go and tried to close on the leader but to no avail, even as Zearfoss worked traffic beginning on lap 16.

Zearfoss took his third career oval victory by 2.402 seconds ahead of Wolfe followed by Kody Lehman, who got by Sheaffer for third during the last two laps.

Sheaffer was fourth with point leader Dylan Cisney in fifth.

The only caution of the race occurred with two laps down, placing third starter Mike Lupfer in second followed by Casner, sixth starter Coleby Frye and fifth starter Rine.

Both Frye and Rine disposed of Casner at the new green and for the next several laps, Frye raced with Lupfer for second as Rine chomped at the bit to get through both of them for second.

Repeatedly, Rine attempted to pull the trigger on the pair only to see the opening he was eyeing close up as the pair throttled for second.

Frye finally took second with seven away and attempted to close on leader Wilson.

Meanwhile, with the logjam for second now opened up, Rine lined up both Lupfer and Frye for a pass, with he made rather handily on the ninth tour before immediately closing on Wilson for the top spot.

Rine went out front with 15 laps to go and entered the rear of the field with 10 laps to go before cruising to a 4.073 second victory over Frye with Wilson in third followed by Lupfer and Chad Hollenbeck.

Miller and Sweigart raced together for control for three laps before Miller took command on the eighth loop.

Sweigart then blew a tire and clouted the first turn wall on the 10th lap, taking himself out of contention.

Miller blasted handily to the victory by 1.618 seconds ahead of Darren Miller.

Walt Peters led the first lap of the xtreme stock main before Ryan Zook took over.

Zook led only two laps before giving way to Herm Renninger took over, trying to score for the third time this season.

Renninger lost power one lap shy of the finish, handing the lead over to Kevin Imes who took the win.