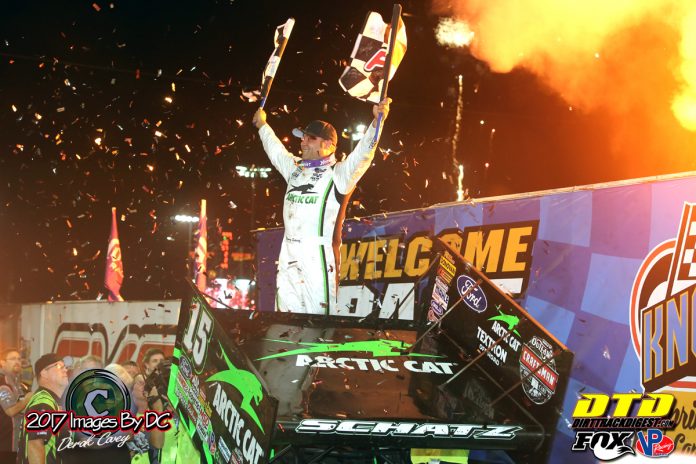 KNOXVILLE, IA – Donny Schatz continues to add to his legendary resume at the Knoxville Raceway, as he took his tenth career championship in the 57th Annual 5-hour ENERGY Knoxville Nationals presented by Casey’s General Stores Saturday night at the Knoxville Raceway. It was the tenth win in twelve years for the Fargo, North Dakota driver, and his eighth aboard the Tony Stewart Racing #15. The win was worth $150,000 and added to the stuff of legends for Donny at Knoxville.

David Gravel, who entered on the pole in the 50-lapper with his perfect score from Thursday night, led early over Schatz and Kerry Madsen. By lap six, he was in lapped traffic. Gravel maneuvered it well, but Schatz stayed close. On the sixteenth lap, Schatz would briefly take the point on the backstretch, but Gravel battled back by.

On lap 19, Austin McCarl went up in smoke, bringing the first caution of the event. Gravel led Schatz, Madsen, Brad Sweet and Brian Brown back to green flag racing. Defending champion, Jason Johnson came from 21st into the top ten by lap 20. His momentum was slowed on lap 22, when Gravel would lose a motor while leading.

The disappointment for the Connecticut driver gave the lead to Schatz. Kyle Larson also inherited a top five spot, and drove by Brown and Sweet for third on the restart. A caution for Terry McCarl, who slowed after getting into the turn three wall, slowed things again.

At that point, the mandatory stop was implemented. After the pause, Schatz led Madsen, Larson, Sweet and Shane Stewart back to green. Madsen took a shot at the leader, but a slider in turn two fell short, allowing Larson to cruise by into second. While Schatz led Larson, Madsen and Stewart, Sweet and Brown exchanged the fifth spot several times.


A final yellow flag flew with twelve laps to go for Greg Hodnett, who stopped in turn four. It erased a 2.2 second lead for Schatz. Back in clean air, Schatz was strong up front. With five laps to go, he entered lapped traffic again. With several cars side by side in front of him, Larson would close.

On the white flag lap, Larson would make a sliding attempt in turn three that would fall short. Schatz would win his tenth Nationals ahead of Larson, Madsen, Stewart and Sweet. Brown, Aaron Reutzel, Rico Abreu, Daryn Pittman and Ian Madsen rounded out the top ten. Rager Phillips won the E main, Jamie Veal won the D, James McFadden claimed the C, and Jason Sides emerged victorious in a highly competitive B main.

“I did everything I could to get by (in traffic),” said Schatz in Victory Lane. “That’s how it works some days. You can’t frustrated by it. You have to figure out what to do. I was off the pace, I knew someone would be coming (at the end of the race). Kyle normally finds everything there is in a race car. You got to stay on your toes with him. He’s an awesome sprint car driver. It stinks that he has another career to deal with. I’m just glad that he’s part of the sport and still comes back. We’re glad to get this win. It’s incredible. This whole race team is incredible with what they do. We just won the Knoxville Nationals!”

“That was a fun, tough race,” said Larson. “We had some good restarts and got to second. We were maintaining pace with him. We were just waiting for lapped traffic. I knew he’d be good in lapped traffic, but I figured there might be a couple times when he wouldn’t clear somebody and get tight. The times he got tight, I got tight on the cushion. It was still a heck of a race. I hammered the wall coming off four coming for the white. I feel that if I hadn’t done that, I could have gotten a run and maybe cleared him in two. I just made a costly mistake and ended up second. It was still a good race for (car owner/crew chief) Paul (Silva) and I. We still had fun. Thanks to the fans for talking to Chip (Ganassi) and helping us come out.”

“I think I had a really good car to contend for the victory,” said Kerry Madsen beside the Tod Quiring #2M. “In traffic, I thought I had a better car than the two cars in front. I thought, ‘No worries’, we usually get to traffic in those deals. Then the caution would come out. I thought I had a shot at him on the restart (after the stoppage). I figured if he left the door open, I was going to go for it. Unfortunately, that cost me second. I was on Kyle’s rear the whole way, but I was never close enough to make a move. I just want to thank my team for working so hard.”