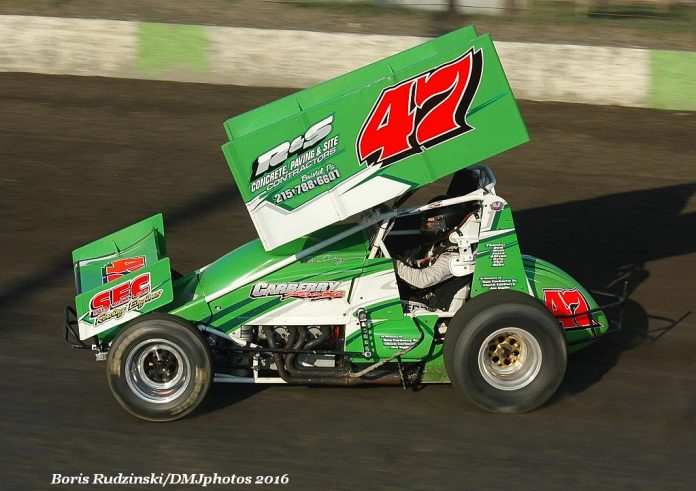 SELINSGROVE, PA – Foss Jewelers Championship Night at Selinsgrove Speedway Saturday produced some of the most exciting racing of the season, and the night was a roller coaster ride for several drivers in the hunt for track titles in the final points races of the season for the 360 sprint cars, super late models, pro stocks, and roadrunners.

Adam Carberry had a heartbreak moment a few weeks ago when a part broke while he was leading the 360 Sprint Car feature event. Carberry worked into lap traffic on lap eight while Michael Walter closed in on Carberry’s rear bumper in Saturday night’s 25-lap main event.

Carberry received an open race track when the yellow flag came out for Justin Whittall on lap nine. Carberry again broke away from the field while Walter and Cody Keller battled for the runner up spot.

Keller never got close enough to make the move as Carberry crossed the line for his first win at Selinsgrove Speedway and his first 360 Sprint Car win.

Carberry and Kissinger were heat race winners for the 360 Sprinters.

Rine closed in on Frye while he tried to make his way through lap traffic. Frye made the winning move in turns one and two when he made a three-wide pass in heavy traffic that Rine wasn’t able to make to remain in striking distance.

Once Frye cleared the traffic he was on track for the victory. At the finish, he crossed the line ahead of Rine, Dylan Yoder, Chad Hollenback, and Tony Adams.

Tony Adams was running fourth when the white flag was displayed. The spot was enough for him to win the championship. Hollenback passed Adams on the final corner to finish fourth and push Adams to fifth. With Mattern’s sixth-place finish he and Adams tied for the Jeff’s Auto Body & Recycling Center late model points championship.

AJ Hoffman and Brad Mitch gave the fans a thrilling end to the points paying season in the 15-lap A&A Auto Stores Pro Stock feature event. Hoffman led the feature race while Mitch pressured him. On one restart Hoffman got out of shape, but made a fantastic save.

On the next restart Mitch again began to challenge the leader. Hoffman, this time, would hang on to the top spot and start to pull away. Point leader Tommy Slanker moved into third and settled there over the final few laps allowing Mitch to continue his focus on the race leader.

Noah Jenson was sixth across the checkered flag ahead of Jake Buck, John Troxell, Wayne Shaffer, and Nick Gentile.

The Collier Paving and Construction Roadrunner 20 led things off in the feature race line up on Saturday. Bob Bussey led much of the event while Keith Bissinger challenged him. Both drivers were previous winners of the big event. No one had ever won the race two times.

On the first lap point leader Will Bruson was involved in a wreck in turn one taking him out of the event. The fate of the championship sat in the hands of the now spun Bissinger who came into the night second in points.

Bussey’s race wasn’t over because Bissinger had to tag the back of the pack. Ryan Zook kept Bussey honest of the last six laps. Bussey held on to become the first two-time winner of the Roadrunner 20 that was worth $1,000. Zook was second followed by Brian Johnson, Michael Smith, and Tyler Amtower.

Bissinger originally crossed the line in seventh place which was enough for Brunson to claim the title. After the fifth place finisher came up light at the scale, Bissinger was credited with sixth. The bump up in points was enough for Bissinger to tie Brunson for the roadrunner points title.

Ben Leister, Jason Davis, and Corey Collier were the heat race winners for the Roadrunner 20.

Race night sponsor Foss Jewelers, located on Route 522 in Selinsgrove, has been serving friends and customers all across the central Pennsylvania region with affordable, high quality jewelry backed with unsurpassed customer service since 1949.

Dan Foss, now the sole proprietor of Foss Jewelers, sponsors the gold championship rings that will be presented to each of the track’s divisional champions at the awards banquet Saturday, Nov. 11, at the Genetti Hotel in Williamsport. Banquet tickets are on sale now for $35 each for adults and $15 for kids ages 5-12.

Two of the four track championships Saturday night ended in a points tie, marking only the fourth and fifth times in Selinsgrove Speedway history.

Hayes Mattern and Tony Adams, and the Collier Paving & Construction roadrunner championship ended in a points tie between Will Brunson and Keith Bissinger.

The last points championship tie at the track occurred in 2000 between 410 sprint car drivers Todd Shaffer and Keith Kauffman. The sprint car division also had a championship tie in 1964 between Dick Tobias and Leroy Felty. The late model division’s only other title tie was in 1980 between Dale Kerstetter and Bob Smith.

Next weekend marks a two-race weekend over the Labor Day holiday at Selinsgrove Speedway!

Selinsgrove Speedway will close out the season Saturday, Sept. 16, with the $8,000-to-win Jim Nace Memorial 35th annual National Open for 410 sprint cars sanctioned by the Arctic Cat All Star Circuit of Champions. The 305 sprint cars, which were rained out on Aug. 19, have been rescheduled to join the 410 sprint cars at the track on Sept. 16.