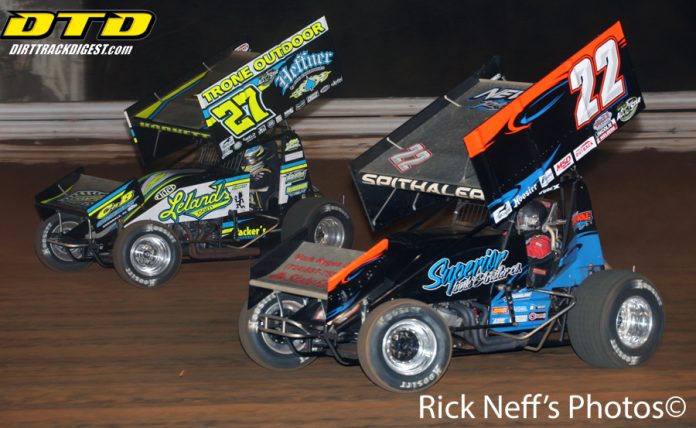 MECHANICSBURG, PA – Greg Hodnett won the season opener at Williams Grove Speedway in March, but had been held out of 410 Sprint car victory lane since then.

Hodnett, of Spring Grove, changed that Friday night as he drove to victory in the 25-lap Van May Tribute race paying $4,069 to win. He returned to win the 360- Sprint car portion of the program as well earning $3,000.

“We came out and won the first night, but since that time it has been pretty few and far between as far as good runs,” said Hodnett. “We had a good run going at the Outlaw show and got rained out, unfortunately. It has been about a month since we’ve been here, but fortunately for us, we got a great starting spot and took advantage of it.”

Hodnett started second in Mike Heffner’s 27 and took the lead over Brian Montieth and TJ Stutts to start the 410 feature. He built a 1.654 second lead in five laps.

He reached lapped traffic with eight laps completed. Montieth began to close and Hodnett’s lead was down to under one second.


They were out of lapped traffic, but the caution flew on lap nine when Troy Fraker stopped on the backstretch.

Hodnett controlled the restart as point leader Freddie Rahmer drove by Stutts and into third. Hodnett increased his lead to over two seconds. Rahmer was racing well along the inside groove taking second from Montieth with 11 to go.

He closed quickly on Hodnett and was right there as they completed lap 19. Hodnett went low into turn three blocking Rahmer’s line as they raced around lapped cars.

“I knew he got into second and I figured he was running the middle bottom, so I decided to change lanes,” said Hodnett. “He has been really good and I figured I’d better try it. I was having a tough time getting by lapped cars off the corners up high.”

That was as close as Rahmer would get as Hodnett pulled away again over the final laps winning by 1.230 seconds over Rahmer. Montieth, Lucas Wolfe, and Stutts completed the top five. Danny Dietrich, Alan Krimes, Steve Buckwalter, Cory Haas and Matt Campbell rounded out the top 10.

Stutts set fast time over the 21-car field with a lap of 16.465. Buckwalter, Chad Trout and Krimes won the heat races.

In the Kramer Williamson Memorial for the United Racing Club and Patriot 360 Sprints, Mark Smith grabbed the lead from Trey Starks as they raced down the frontstretch to complete lap three.

The red flag stopped the race for a backstretch crash including Eddie Strada and JJ Grasso. No drivers were hurt.

On the restart, Jared Zimbardi hit the inside turn one fence and crashed hard. He was removed from the car and transported to the hospital for observation. He was talking to emergency workers.

Hodnett drove by Starks and into second on the restart. He went after Smith taking the lead in turn two the next time around.

Another caution slowed the pace on lap seven. Hodnett controlled the restart and drove away.

The caution flew with six laps to go, but Hodnett was not to be denied as he got a good restart again and led the final laps to score the win over Smith. Lucas Wolfe raced to the third over the final laps. Jason Shultz and Starks completed the top five. Steve Buckwalter, Kevin Nagy, Curt Michael, Josh Weller and Robbie Stillwaggon rounded out the top 10.