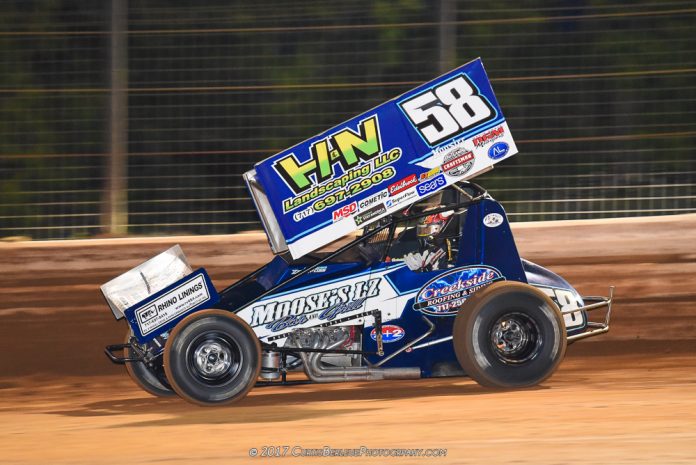 He earned $3,800 for his second Grove win of the season and fifth overall since beating the Outlaws at Williams Grove in July.

Meanwhile, in the K1 Summer Series finale for the 358 Sprints, it was Brie Hershey scoring the win earning $1,500 and Chase Dietz earning the series championship.

It was the second Grove win of the season for “The Jonestown Jet” in the Aaron Long No. 58.

“We had a heck of a car tonight,” said Zearfoss. “Aaron and the boys have been working hard. We’ve been trying some stuff after the Outlaw race. Friday night we weren’t so good. Tonight, we came back with basic stuff and here we stand.”


His first Grove win came in July against the Outlaws.

“My confidence is sky high right now,” said Zearfoss. “Once you beat the best in the world, you feel like you can do anything. My crew gives me great cars week-in and week-out, I just get to drive the thing. It’s a great feeling. A few years ago, I was down in the dumps wondering if I could even do this anymore. This sport will really drag you down and it will really get you high. When you get on them highs, you have to ride them the best you can.”

Chad Trout slowed on the backstretch on the opening lap bringing out the caution flag.

The red flag flew with two laps completed when Chris Arnold and Kody Lehman crashed in turn three. They were okay.

Tomecek controlled the restart as Zearfoss blasted around Campbell for second. Zearfoss couldn’t get to the leader as Brian Montieth passed Brandon Rahmer and then Rodney Westhafer moving into fourth.

The top three were close as they raced down the frontstretch completing lap eight.

Tomecek blew an engine coming off turn two. Zearfoss took evasive active driving inside of him. Campbell also moved to miss Zearfoss and hit the inside fence, but continued. The red flag stopped the race. Tomecek was okay.

“I was lucky enough to get below him and hold on to second at the moment and assume the lead,” said Zearfoss.

Zearfoss led the field down for the restart. Montieth went after Campbell, but couldn’t make the pass.

Zearfoss led by 1.476 seconds at the half-way point. Montieth passed Campbell with eight to go and then Rahmer did as well.

Montieth blew a tire and hit the third turn fence giving up second with six to go. Campbell pitted under caution with a flat tire giving up fourth.

Zearfoss led Rahmer and Rodney Westhafer, who was driving a Billy Kimmel tribute car No.47, for the lap 19 restart.

Rahmer tried a third turn slider on the leader following the restart. He could only get next to Zearfoss, who then pulled away over the final laps winning the Kimmel Memorial by 1.345.

“It’s a great feeling to win a memorial race,” said Zearfoss. “I didn’t get to race with Billy, but I knew of him. He was definitely one of those up and comers It’s a shame his life got cut short, but he was doing what he loved. I can’t thank the family enough for sticking with it in the sport and doing everything that they do. It’s greatly appreciated.”

Eight-lap heat races for the 22 cars in the 410 Sprints were won by Westhafer, Dietrich and Hodnett.

Shai Morris started on the pole and grabbed the lead of the 358 feature that was marred by two red flags in the first five laps. A third red flag occurred on the lap five restart in turn one involving Rich Eichelberger and TJ DeHaven. No injuries were reported.

Morris led until lap 20 when Nyle Berkes used an inside move off turn four to take the top spot. The caution flew setting up a five-lap dash to the finish.

Fifth starter Brie Hershey of Dillsburg moved to second on the restart and stalked the leader. With the white flag waving, Hershey raced to the outside of Berkes coming off turn four. She squeezed between him and the wall taking the lead

“I tried to keep my momentum up,” said Hershey. “I knew everybody was behind me. I thought if I could keep my speed up I’d be okay. That’s the most fun race I’ve run in a while. I’m still processing it.”

Eight-lap heat races for the 28 cars in the 358 Sprints were won by Kody Hartlaub, Rich Eichelberger and Hershey. Matt Findley won the consolation.