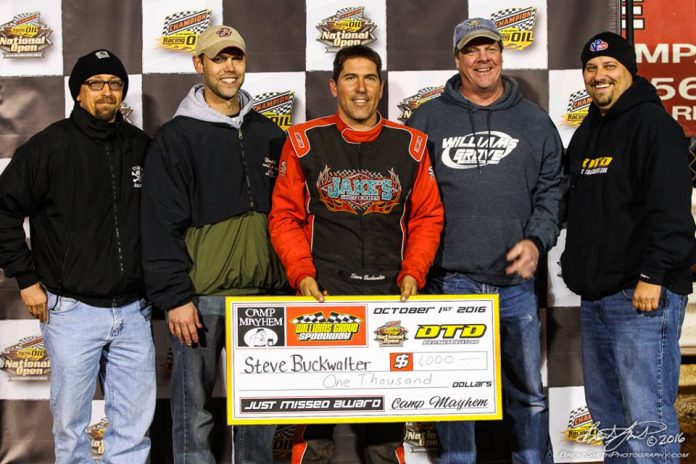 BREWERTON, NY – DirtTrackDigest.com has joined forces with Camp Mayhem to raise money for the first ever “Just Missed” award to be given at the Williams Grove Speedway National Open. This award will be presented to the highest finishing driver in the Last Chance Showdown that does not earn a provisional starting spot for Saturday night’s $50,000 win National Open for the World of Outlaws Craftsman® Sprint Car Series.

Camp Mayhem is a collection of loyal National Open supporters that come together for the three day event each year at the Williams Grove Speedway. Many in the group don’t have the opportunity to spend time together until their yearly pilgrimage to the Cumberland County oval. The group has camped together for nearly a decade in various locations around the grounds. Most recently they’ve moved their location to the top of the hill on the backside of the speedway.

DirtTrackDigest.com is the leading provider of dirt racing news in the Northeast. The website, which is updated daily, offers news about Northeast Dirt Modifieds, Pennsylvania Sprint Car racing as well as news from all major national touring organizations. The site covers every major dirt racing event in the United States including exclusive content from the Knoxville Nationals, Kings Royal, The World Finals as well as the DIRTcar Nationals in Florida during February Speedweeks.

The group has already raised $750 in just over a week toward the overall prize for whichever driver fails to make the cut after Saturday night’s Last Chance Showdown. The group is hoping to raise even more money as the event draws closer. Each dollar raised by the entities will be given back to the driver that earns the award as a thank you for their hard work and dedication to Sprint Car racing.

Anyone looking to help boost the prize may contact DirtTrackDigest.com Managing Editor Mike Mallett via email at mikemallett@dirttrackdigest.com or Camp Mayhem representative Neal Wilt at justmissedaward@gmail.com. Several fans have already come on board as the groups hope to reach their goal of raising over $1,000 for the award.