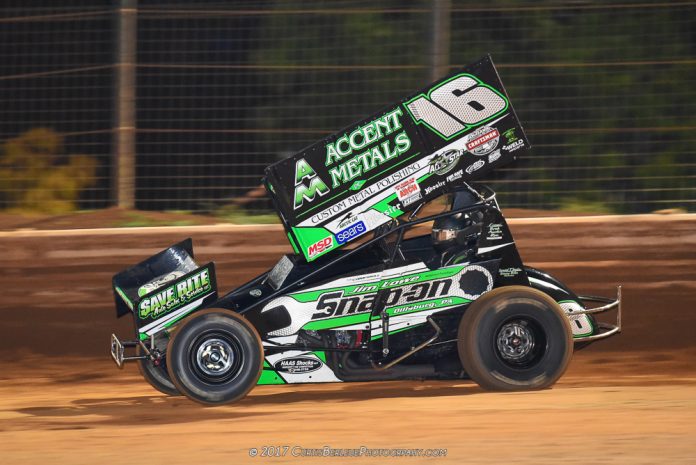 MECHANICSBURG, PA – Matt Campbell of Fawn Grove picked up his first career 410 Sprint car win Friday night at Williams Grove Speedway, taking the lead from Tim Wagaman on the 10th tour of the 25-lap feature.
.
The 19-year-old from Fawn Grove, a co-National 410 Rookie-of-the-Year last year, has been fast at the Grove before, and finally put together a complete performance earning $3,600 for the win.

Wagaman started on the pole and led the opening two circuits of the 25-lap main event while racing fiercely with Jared Esh, who started second.

The pair see-sawed for the lead repeatedly before Esh crossed the line with three laps complete as the leader by just a few feet over Wagaman.

Wagaman then passed Esh back in the first and second turns but Esh battled back to the inside on the backchute and the pair raced wheel to wheel and wing to wing into the third turn with neither pilot giving an inch.

The end result found Esh backing his car up across the racetrack in the third corner before bringing out the red flag after massive contact with the outside rail.


Esh was transported by ambulance complaining of neck and back pain.

Anthony Macri, who was running third at the time, spun to avoid the crash. Under the red flag, Brian Montieth, who would have restarted fourth, was pushed to the pits.
Wagaman controlled the restart with sixth starter Campbell now in second and Wagaman was running the cushion as Campbell made the inside groove work to close in on the leader lap after lap, especially right through the middle of the second corner.

An inside move off the second corner got Campbell by Wagaman for the lead and Campbell completed lap 10 as the leader just before the caution flew for a stopped Steve Buckwalter on the front chute.

Campbell stretched out his lead over Wagaman and Rick Lafferty on the restart as the race raged behind them between Lucas Wolfe, James McFadden, Freddie Rahmer and Brock Zearfoss who were all battling for a top five finish.

Campbell drove around slower cars with ease during the last half of the race, cruising to his first career Grove 410 win after scoring three in the 358 sprint division.

Wagaman scored his best career Grove finish in second. Lafferty finished third and Wolfe took fourth back from McFadden on the final lap.

Doug Hammaker of Grantville took the lead from Jordan Givler following a lap eight restart and drove away top win the 358-sprint feature.

The restart occurred after Brie Hershey flipped in the first corner.

Hammaker earned $1,500 for the fifth victory of his career in the division at the track.