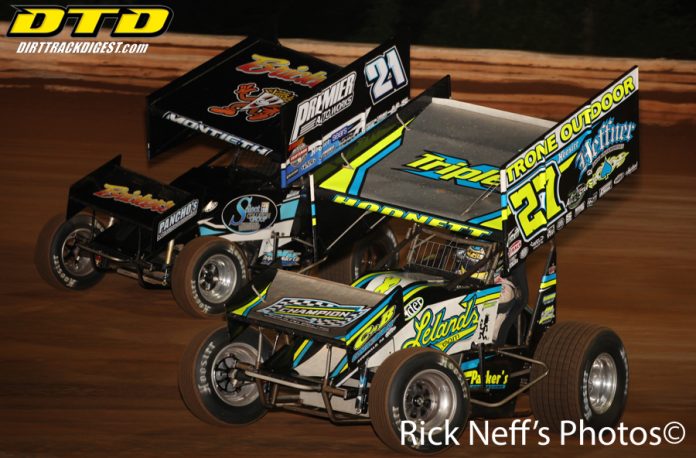 MECHANICSBURG, PA – Greg Hodnett is ready for the World of Outlaws-sanctioned Williams Grove National Open next weekend after picking up his 70th career Sprint car win at the Grove Friday night.

Hodnett’s third Grove win of the season was worth $4,000 in the Mike Heffner-owned No. 27, but it wasn’t easy as he had constant pressure from Lance Dewease over the final half of the 25-lap main event.

“I could hear him pushing us around,” said Hodnett about Dewease. “I wasn’t very good off of two no matter what I was doing. In three and four, I couldn’t get stuck again to either go across or hit the bottom. He almost drove by me in three and four the one time. I figured I’d better get going and see if I could hold him off for a couple laps.”


Hodnett, of Spring Grove, started on the pole and beat Brian Brown into the first turn on the opening lap to take the lead. Dewease started fourth and passed Brown taking second on the second lap.

Hodnett’s lead was 1.903 when they reached slower traffic at the back of the field with seven laps completed.

The heavy lapped traffic helped Dewease cut Hodnett’s lead in half in only one lap. Dewease ducked low on Hodnett, but Hodnett maintained the lead by about a half-second.

Dewease took another shot at Hodnett, but wasn’t able to seal the deal as the drivers ranked second and third on the all-time Grove win list continued to battle for the win.

“If he could have beat me to the cushion it would have been his easily,” said Hodnett, who starts on the pole of the postponed Summer Nationals feature Thursday night. “Lance is not going to crash himself or me because we know we’ve got to race tomorrow and race next week. This is more of an organized hot lap session than anything for us. Although it’s nice to win and be competitive. We also know there’s bigger fish to fry here in the next couple weeks. He had a huge run coming off four and tried to take that shot. Honestly, if he would have been about two feet in front of us then I would have backed off and let him go, but fortunately we had a lot of momentum coming off the top.”

Hodnett stayed in front of Dewease as they both switched lanes working through lapped traffic. The last five laps saw Dewease challenge Hodnett again on the low side, but Hodnett switched to the bottom groove to take away Dewease’s preferred line.

Hodnett cleared one final lapped car off turn two on the last lap securing the win by 0.803 over Dewease.

TJ Stutts set fast time over the 29-car field with a lap of 16.941. Stutts, Hodnett and James McFadden won the eight-lap heat races. Hodnett passed Brown on the final lap to win the dash. Anthony Macri won the B-main.

“The way this year went, we really, really needed this,” said Fisher.