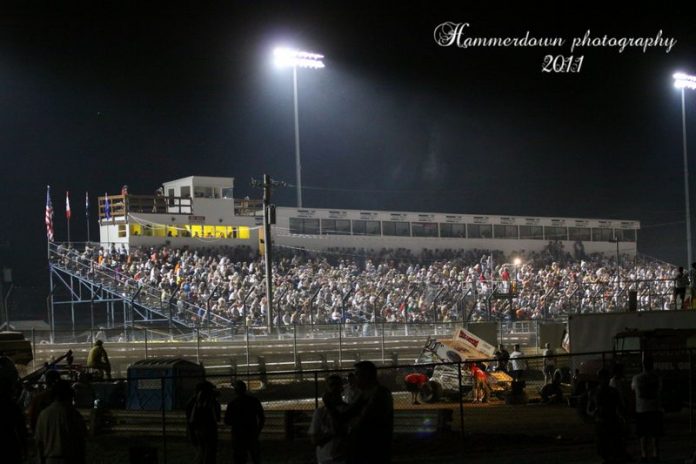 MECHANICSBURG, PA – Sprint car fans in the East will gather this Saturday night to see the 55th running of the Williams Grove Speedway Champion Racing Oil National Open for sprint cars sanctioned by the World of Outlaws Craftsman sprint car series, going 40-laps in distance and paying $50,000 to the winner.

The National Open has a grand history that dates back to its inception and first champion in 1963.

Eventual Indianapolis 500 champion Gordon Johncock of Hastings, Mich., won the 100-lap affair in a contraption that had what looked like a wing atop its roll cage.

And this too would soon come to pass, as sprint cars would begin taking over dirt tracks in the east, including Williams Grove Speedway.

The name of Blaney graced the National Open winner’s circle in 1966 as family patriarch Lou took Open laurels decades before his sons Dave and Dale would compete on the scene.

Bobbie Adamson, becoming a region name, took back-to-back victories in 1967 and 1968 before a virtual unknown named Gene Varner from Selinsgrove drove a back-up Gary Wasson No. 5 to an upset win in 1969 after a distance of 150 laps.

The decade of the 1970’s dawned with Altoona flyer Johnny Grum picking up the Open win.

The first of three consecutive wins by Midwest transplant Kenny Weld took place in 1971. All three of Weld’s wins came aboard the Bob Weikert No. 29.

Another transplant, The Bandit, Steve Smith Sr., took wins in 1974 and again in a rain-shortened 122-lap race in 1976 while The Original Outlaw, Bobby Allen drove to a win in 1975.

Texas native racing brother Van May took the 1977 version of the National Open before the Pink Panther struck in 1978 with a Kramer Williamson 100-lap win.

Smokey Snellbaker drove to victory for Charlie Lloyd in 1979 before the grandson of a coal miner named Lucas, Allen Klinger of Hegins kicked off the 1980’s with a 40-lap victory.

Steve Smith Sr. returned for a third Open triumph in 1981.

Lynn Paxton went back-to-back in 1982 and 1983 and stunned the racing world after his second 75-lap win by announcing his early retirement from the sport in victory lane.

Three more in a row for owner Bob Weikert came at the hands of South Dakota driver Doug Wolfgang from 1984 – 1986.

Wolfgang got stunned, denied and passed by Joey Allen for the victory in 1987.

The Mouse, Kenny Jacobs of Holmesville, Ohio, took another win for Weikert in 1988.

The year 1989 found the first true World of Outlaws National Open contested as the yearly sanctioning began with Stevie Smith taking a victory to carry on his father’s tradition.

Technically, the 1978 National Open was considered an outlaws race as well although no outlaws drivers competed in the event.

One of if not the greatest sprint car driver(s) of all time, Hoosier Steve Kinser took his first National Open checkers in 1990.

Stevie Smith returned for another Open win, both for car owner Al Hamilton, in 1991, and now at a distance of 50 laps.

Kinser was again the champion in 1992 before daytime specialist Don Kreitz Jr. drove to victory under the Sunday sun in 1993 after 40 laps of action.

Steve Kinser was again the winner in 1994 before outlaw cousin Mark Kinser took 1995.

The locals went back in front in 1996 with Lance Dewease and No. 461 car owner Walt Dyer.

Sammy Swindell won his first National Open in 1997 on a night that had fans returning to frozen windshields on their cars by the time the race ended.

Mark Kinser returned for victory in 1999 before one of today’s outlaws stars and champions, Donny Schatz took his first win in 2000 as part of what would become a historic record in National Open competition in another 13 years.

The first $50,000 to win National Open was scored by Lancaster’s Doug Esh in 2006 and as it turned out it was the richest and shortest Open in history when rains hit on lap 26 of 40.

Thanks to more persistent rain, another unsanctioned event in 2008 saw future outlaws and All Stars star Cody Darrah drive to victory.

Greg Hodnett took a hugely popular National Open victory for the PA Posse in 2009 driving the Jim and Sandy Kline No. 22.

Sammy Swindell got the second Open win of his career in 2010.

With the $50,000, 40-lap victory, Schatz became the winningest driver in National Open history, breaking a four-win tie with Steve Kinser.

In 2013, the grand career of local driver Fred Rahmer of Salfordville was capped off at Williams Grove with his first and only triumph in the lucrative, prestigious National Open as Rahmer led the final 31 laps of the 40-lap feature before the veteran retired from the sport at the close of the season.

Connecticut driver David Gravel took the $50,000 win in 2014 but not without controversy.

The outlaws flyer was overtaken by local favorite Stevie Smith during the last half of the race before the slightest of contact from a closely following Gravel found Smith spinning in the first turn with six laps to go while Gravel retook command for the victory.

And then Stevie Smith got redemption in what was to be the first three-day National Open in history in 2015.

After three consecutive days of rain stopped the event dead in its tracks, a break with the weather on Sunday allowed a raindated Open to be completed with Smith taking the lead from Danny Dietrich on the ninth tour to lead the final 31 circuits and beat Schatz to the line for victory.

An uncanny three more days of rain and raw weather wiped out a second attempt at a three-day nationals in 2016.

A make up two weeks later found Danny Dietrich taking the lead from Joey Saldana with two laps to go in the 40-lap affair to score a wildly popluar win for the Pennsylvania Posse. Brad Sweet also took a turn at leading the main.