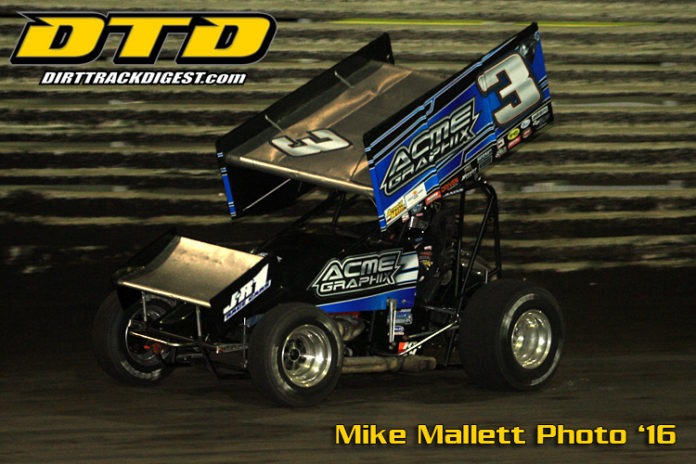 That changed last year though, as Sammy Swindell added his fourth event triumph to match the fourth STN crown that “The Texan” captured a dozen years earlier in 2004.

Following a Wednesday night Test ‘N Tune session, the action gets fast and furious with two full nights of qualifying action on Thursday and Friday (October 12-13) and then Saturday’s (October 14) STN championship finale.  While the winner of the 30th Annual Short Track Nationals will pocket $15,000, each STN championship feature starter will earn at least $2,000.  More than $100,000 in prize money will be doled out over the course of the weekend.

Sammy Swindell picked off his first STN triumph in the early years of the event, topping the third edition in 1990 when it was a 410-ci tilt.  Swindell’s next STN triumph didn’t occur until 21 years later in 2011.

In the interim, Gary Wright ran up STN totals that may never be rivaled including triumphs in 1995, 1999, 2003 and 2004.  Along with his four STN victories, Wright also posted 14 overall top-fives and 18 top-tens along with five preliminary feature wins.  No other driver has put up double-digit top-fives with only Terry Gray (13) and Tim Crawley (10) reaching double-digits in top-tens.

In recent years, Swindell has put together a string of strong STN efforts with wins in alternating editions of the event since 2011.  Swindell picked off crown number three in 2013 and then added his fourth last year after the 2015 edition fell victim to Mother Nature.

Once again driving the Rains No. 3 entry, Swindell sets his sights on an unprecedented fifth Short Track Nationals triumph when action fires off next Thursday night at I-30 Speedway.

Drivers entering by the pre-entry deadline of Friday, October 6, will receive a free pit pass for Thursday through Saturday.  Pre-entry is $150.  Entry fee for those entering after October 6 is $250 with no driver pit pass.  Entry forms are available at http://www.i-30speedway.com/flyers/2017STNFlyer.pdf.

The Entries:  Entry forms are available at http://www.i-30speedway.com/flyers/2017STNFlyer.pdf.  Entry is $150 if entered by October 26, or $250 after October 6.  Entries submitted by October 6 receive one free driver pit pass for Thursday, Friday and Saturday.

Checks, money orders and cashier’s checks are accepted and may be mailed to I-30 Speedway c/o Tracey Clay, 13219 Interstate 30, Little Rock AR 72209, made payable to Tracey Clay.

The Format:  All competitors will be eligible to compete on either or both of the Thursday and Friday qualifying nights (no split field) after a Wednesday night Test ‘N Tune.

The top three from each qualifying night will be locked into Saturday night’s $15,000-to-win, $2,000-to-start STN Championship Finale.  Those six drivers will battle it out in Saturday’s Pack’s Dash for Cash to determine the alignment of the front three rows of the championship main event.


The Tickets:  Advance tickets for all three nights (Thursday, Friday and Saturday) are on sale for just $55 if paying cash or $57 if paying via PayPal or credit/debit card.

Day of show prices are $20 on Thursday and Friday and $28 on Saturday plus a $1 processing fee per ticket if paying by credit/debit card.

Children’s tickets will be available at the event only for just $2 on Thursday and Friday and then $5 on Saturday plus a $1 processing fee per ticket if paying by credit/debit card.

Pit passes are $15 on Wednesday, $35 on Thursday and Friday and then $40 on Saturday.  Driver pit pass for Thursday/Friday/Saturday is included in the $150 entry fee if submitted by the deadline.