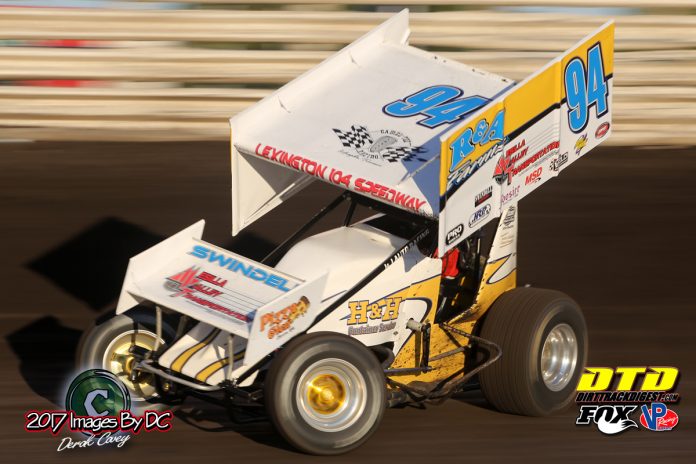 LITTLE ROCK, AR – It all unfolds next weekend as top Sprint Car drivers from throughout the nation and beyond converge upon Little Rock’s I-30 Speedway for the 30th Annual COMP Cams Short Track Nationals presented by Hoosier Tires.

And with racing action for the premier event set to fire off Thursday night after a Wednesday Test ‘N Tune session from 7:30 p.m. to 10:0 p.m., the entry list has been revealed at 51 and counting with more entries rolling in each day.

Doling out more than $100,000 over the course of the weekend, the 30th edition of the COMP Cams Short Track Nationals will culminate with the Saturday night, October 14, $15,000-to-win, $2,000-to-start STN championship feature event.

The current list of 51 includes competitors from a dozen different states as well as South Australia.

A handful of past winners are among those already entered including four-time and reigning STN champion Sammy Swindell, two-time winners Paul McMahan and Tony Bruce, Jr., and one-time winners Terry Gray and Wayne Johnson.

The list of drivers vying for a first STN crown is a deep one with the likes of Aaron Reutzel, Sam Hafertepe, Jr., Derek Hagar, Willie Croft and Jeff Swindell just to scratch the surface.

With entries still coming in by the hour, here is your first look at this year’s Short Track Nationals entry list….


The pre-entry discount of $150 expired with entries filed or postmarked by October 6, with post-entries for the 30th Annual COMP Cams Short Track Nationals presented by Hoosier Tires filed for $250 by calling the track at 501-455-4567 or at http://www.i-30speedway.com/flyers/2017STNFlyer.pdf.

Three-night advance tickets are available until Wednesday, October 11, for just $55 if paying by cash ($57 if paying by PayPal or debit/credit card).  Day of event prices are $20 on Thursday and Friday and then $28 on Saturday.

The Entries:  Entry forms are available at http://www.i-30speedway.com/flyers/2017STNFlyer.pdf.  Entry is $150 if entered by October 26, or $250 after October 6.  Entries submitted by October 6 receive one free driver pit pass for Thursday, Friday and Saturday.

Checks, money orders and cashier’s checks are accepted and may be mailed to I-30 Speedway c/o Tracey Clay, 13219 Interstate 30, Little Rock AR 72209, made payable to Tracey Clay.

The Format:  All competitors will be eligible to compete on either or both of the Thursday and Friday qualifying nights (no split field) after a Wednesday night Test ‘N Tune from 7:30 p.m. to 10:00 p.m.

The top three from each qualifying night will be locked into Saturday night’s $15,000-to-win, $2,000-to-start STN Championship Finale.  Those six drivers will battle it out in Saturday’s Pack’s Dash for Cash to determine the alignment of the front three rows of the championship main event.

The Tickets:  Advance tickets for all three nights (Thursday, Friday and Saturday) are on sale for just $55 if paying cash or $57 if paying via PayPal or credit/debit card.

Day of show prices are $20 on Thursday and Friday and $28 on Saturday plus a $1 processing fee per ticket if paying by credit/debit card.

Children’s tickets will be available at the event only for just $2 on Thursday and Friday and then $5 on Saturday plus a $1 processing fee per ticket if paying by credit/debit card.

Pit passes are $15 on Wednesday, $35 on Thursday and Friday and then $40 on Saturday.  Driver pit pass for Thursday/Friday/Saturday is included in the $150 entry fee if submitted by the deadline.