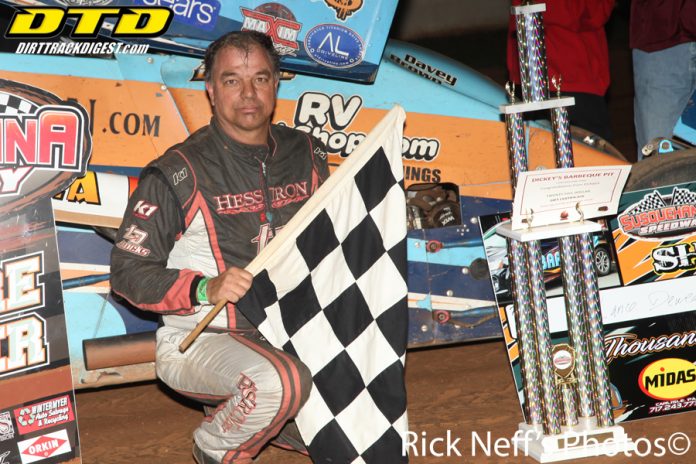 The event closed the curtain on the 2017 racing season at Susquehanna and in Central Pennsylvania.

Chase Dietz dominated the 25-lap 358 Sprint car feature for his second win of the season.

After setting quick time and winning the Dash, World of Outlaws regular Logan Schuchart took control of the 410 Sprint car feature as Joey Saldana settled into the runner-up spot.


As Schuchart set the pace, a lap four incident brought out a yellow flag when contact was made between Danny Dietrich and Greg Hodnett that also collected Freddie Rahmer and Cory Haas. Heavy damage to Hodnett’s car sidelined him for the day as was Dietrich and Rahmer.

On the restart, Anthony Fiore brought out a red flag after flipping.

Saldana got high on the restart allowing Lucas Wolfe and Dewease by as Dewease began his charge to the front after starting sixth.

Dewease made the race winning pass on Schuchart with 14 laps complete but action got heated when Schuchart attempted to get back around Dewease but ran over the front end causing front wing damage to the Kreitz Racing 69K machine. After some dramatics while the field was under caution, Schuchart pitted with a flat tire and rejoined the rear of the field.

Despite the damage, Dewease was able to keep Saldana at bay for the remainder of the event to score his 19th career Susquehanna win, 13th overall this season and second of the year at the York Haven oval.

Saldana finished second ahead of Wolfe, ninth starting Brock Zearfoss and 10th starting Brian Montieth with Mark Smith earning the Hard Charger coming from 18th to sixth ahead of Anthony Macri, Haas from the rear of the field, Brandon Rahmer and Schuchart.

Schuchart set fast time over the 30 car field with a lap of 15.655 seconds while heat races were won by Dewease, Ryan Smith and Dietrich. Brett Michalski won the consolation.

A late race red for a flip by Jake Eldreth would close the field on the Spring Grove racer but he was not to be denied the win as he took the checkered flag.