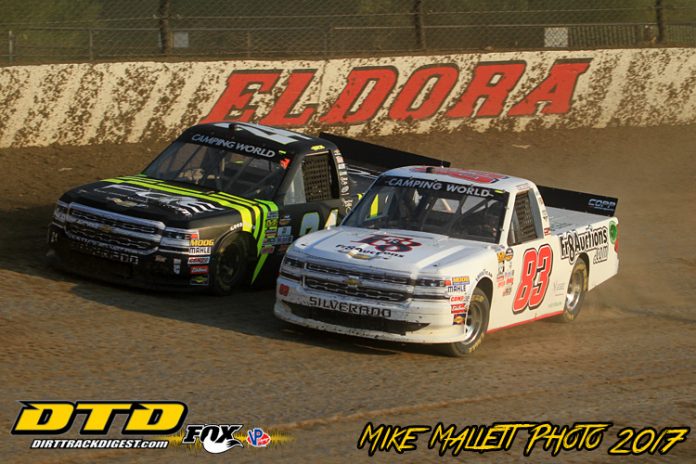 ROSSBURG, OH – Tickets and campsites for Eldora Speedway’s 2018 Marquee Events will go on public sale Saturday morning, December 2nd at 10:00 a.m. All Dirt Late Model Dream, Kings Royal, NASCAR Camping World Truck Series and World 100 ticket orders can be placed online at www.EldoraSpeedway.com, by phone at (937) 338-3815 or in person at the speedway office.

“Our team is ready to go with every phone staffed, an upgraded phone system and an expanded hold cue,” said Tess Clark, ticket manager and the granddaughter of Eldora founders Earl and Berniece Baltes. “Even though online ticketing is extremely popular, so many of our fans know us personally and want to call in so we will have a full staff of agents in-house and ready to answer the box office hotline of (937) 338-3815.”

The ticketing portion of www.EldoraSpeedway.com is capable of handling thousands of orders simultaneously, processing orders 24 hours a day, seven days a week and 365 days a year.
A full bank of ticket agents capable of handling 50 callers at a time, plus walk-in orders, will be available from 10 a.m. to 3 p.m. on Saturday for phone orders at (937) 338-3815.

“This was our most successful renewal season ever, and the add and exchange upgrades were the largest we’ve had since we started them, so our staff has been very busy since the season ended,” concluded Clark. “A lot of people are getting Eldora tickets for Christmas!”


Tickets and campsites ordered by noon on Friday, December 15 will be mailed in time for Christmas delivery.

About Eldora Speedway:
Since carved from a cornfield in the natural amphitheater that existed between the Eldora Ballroom and the Wabash River by bandleader and dance promoter Earl Baltes in 1954, Eldora Speedway has grown to be a frontrunner in motorsports growth and stability. Baltes chose to sell the legendary high-banked clay oval to motorsports entrepreneur and NASCAR, IndyCar and USAC driving champion Tony Stewart in 2004. Eldora will celebrate its 65th consecutive season of racing in 2018 featuring the biggest events in short-track racing, including: the 24th running of the $100,000-to-win Dirt Late Model Dream Weekend on June 7th-8th-9th; the 35th annual $50,000-to-win Kings Royal Weekend on July 12th-13th-14th; the sixth annual Eldora Dirt Derby, the only NASCAR race on dirt, Wednesday, July 18th; the 48thannual World 100 Weekend on September 6th-7th-8th; and the historic 4-Crown Nationals on September 21st and 22nd. The complete schedule for Eldora’s 2018 season, including ticket and campsite information is posted on www.EldoraSpeedway.com. Fans can get off-season access from Eldora Speedway by following @EldoraSpeedway on Twitter, Instagram and Snapchat, hitting ‘Like’ at www.facebook.com/EldoraSpeedway and adding to nearly 6-million views of exclusive video on www.youtube.com/EldoraSpeedway.