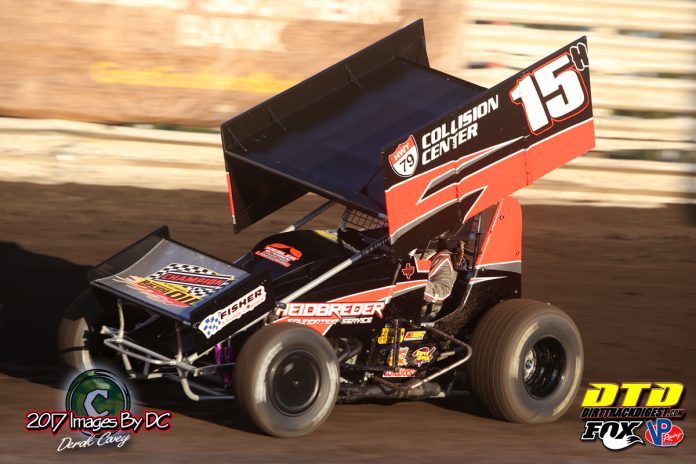 INDIANAPOLIS, IN – The Lucas Oil American Sprint Car Series National Tour presented by MAVTV Motorsports Network will make first-ever appearances in 2018 at Pennsylvania’s Williams Grove Speedway Friday, May 4, and Selinsgrove Speedway Saturday, May 5, in the “Battle of the Groves” sponsored by Eleven Oaks Farm.

ASCS officials made the hugely-anticipated announcement today at the Performance Racing Industry (PRI) tradeshow in Indianapolis.

“Every year, we get more requests from fans to go to tracks in two states. Pennsylvania and California. Getting to finally get races at Williams Grove and Selinsgrove, we are really excited and hope it’s something we can build on to bring more to the fans in the future,” commented ASCS National Director, Matt Ward.

Williams Grove Speedway, located in Mechanicsburg, Pa. will host its maiden ASCS National Tour event in conjunction with the United Racing Club (URC) plus a complete program of 410 Sprint Car racing on Friday, May 4.

The ASCS National Tour will then head 60 miles north to Selinsgrove Speedway in Selinsgrove, Pa., for another full-points show with the URC on Saturday, May 5.


“This will be a great opportunity for our fans to see one of the nation’s top touring Sprint Car groups at Williams Grove and Selinsgrove,” said Williams Grove general manager Justin Loh. “This will be one of the must-see weekends of racing with URC’s participation and several of our weekly 410 sprint drivers expected to compete in both divisions.”

“We’re excited to bring the ASCS to two historic tracks for one blockbuster weekend of Sprint Car racing,” said Selinsgrove Speedway general manager Steve Inch. “Selinsgrove is the only track in Pennsylvania that features weekly 360 Sprint Car racing and hosting the ASCS National Tour will be one of the highlights of the 2018 season.”

Sam Hafertepe Jr., of Sunnyvale, Texas, is the two-time defending Lucas Oil ASCS National Tour champion. He scored 15 A-main feature wins this year and collected $60,000 for his second career title. Hafertepe is expected to return to the series next year and chase the three-peat.

The last time the Lucas Oil ASCS National Tour presented by the MAVTV Motorsports Network stopped in Pennsylvania was on May 24, 2007, with Jason Johnson topping competition at Susquehanna Speedway.

More details on the ASCS’s northeast swing will be released soon. For additional information on the participating speedways, please visit williamsgrove.com and selinsgrovespeedway.com.

Associate sponsors for the Lucas Oil American Sprint Car Series presented by the MAVTV Motorsports Network include Hoosier Racing Tire, CP Carrillo Pistons, EMI, and Brodix. All Heat Races are brought to you by ButlerBuilt Professional Seating Systems. All B-Features are presented by BMRS.

Communications for the American Sprint Car Series is provided by Racing Electronics. All events are broadcast online at racinboys.com.