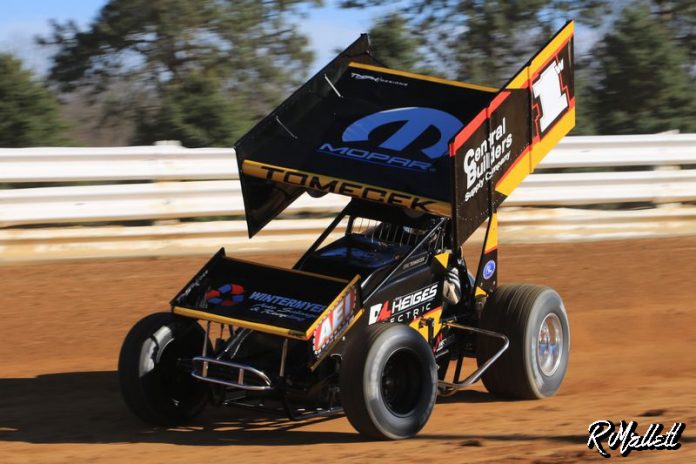 MYERSTOWN, PA – The month of October is typically stocked with big, end of the season races. In 2018, there will be a new addition to the list of big money events…and this one will knock your socks off!

Action Track USA’s Rich Tobias and Doug Rose are teaming up with Selinsgrove Speedway’s Mike Heffner to present the first World Series of Dirt Track Racing from October 11 – 14, and it will be contested on the big, fast Selinsgrove half-mile as well as the smaller Selinsgrove Raceway Park.

This monster event will be a dirt racing fan’s dream, as practically every division that competes on clay will be part of the World Series of Dirt Track Racing. Three different classes of Sprint Cars – 410’s, 360’s, and the 305’s – will be on the docket along with the USAC All Pro SpeedSTRs, the 602 Modifieds, the Super Late Models, and Street Stocks. And, in an unprecedented venture, Tobias, Rose, and Heffner are also adding the AMA Flat Track Motorcycles to the mega-card of motorsports merriment.

While the big cars and bikes will do battle on the ultra fast half mile oval, the immensely popular small car divisions have not been forgotten by the organizers of the WSoDR. Friday and Saturday night, October 12 & 13, will see the Action Track USA Hyper Racing 600 Sprints, All Star Slingshots, and Junior Slingshots competing on the racey bullring known as Selinsgrove Raceway Park on the inside of the big track.

Tobias and Rose envision more than 300 cars in the pits and on the speedway’s during the course of the weekend. The total purse will be well over $100,000, with big dollars on the line for each division. “With the money that will be up for grabs and all the different classes in action during the weekend, fans can expect to see many of the top names in local and national motorsports,” said Rose. “And we’re certain that several drivers will take advantage of this unique opportunity to enter multiple classes.”


Enhancements to the facility are already underway, with many of the projects geared toward next October’s World Series of Dirt Racing. For example, the infield will not only be ready to accept fans for the first time, but camping will also be permitted in the spacious infield during the weekend extravaganza.

The tentative schedule for the WSoDR will have various activities occurring day and night for fans’ enjoyment. Thursday, October 11 is move-in day for campers and competitors. On Friday the 12th, the Super Late Models, 360 Sprints, and SpeedSTRs will qualify, as will the AMA Motorcycles. Those divisions will race on Saturday afternoon, as all of the weekend’s activity on the half-mile oval will take place from noon to 5 p.m. One of Saturday’s highlights will be the World Series 100 for the SpeedSTRs, featuring live pit stops and a $9,000 paycheck going to the winner.

Following Saturday afternoon’s competition, the 602 Modifieds, Street Stocks, and 305 Sprint Cars will qualify. They will race, along with the 410 Sprint Cars, on Sunday afternoon.

As mentioned, the wingless 600 Sprints, All Star Slingshots, and Junior Slingshots will spray the clay on Friday and Saturday evening on the competitive Selinsgrove Raceway Park bullring. These events will permit fans and other racers to sit back and enjoy some intense wheel-to-wheel action presented by the stars of tomorrow and the very best throttle-jockeys in their respective divisions.

Additional information regarding this colossal event will be released in the coming weeks and months as details are finalized. Stay tuned to the Selinsgrove Speedway website and the World Series of Dirt Facebook page.