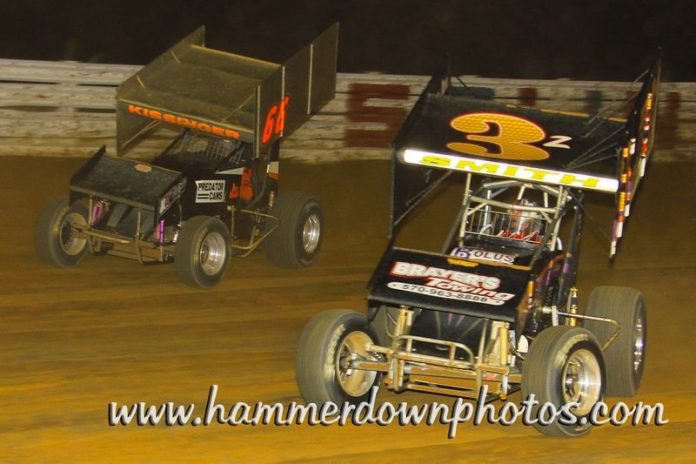 SELINSGROVE, PA – Selinsgrove Speedway officials released an action-packed 25-race schedule today that is highlighted by a number of high-profile motorsports events during the 2018 racing season.

All the excitement and anticipation surrounding the upcoming season is being amplified by the speedway’s biggest change in its 72-year history with the pit area being moved outside the half-mile oval to provide fans with a wide-open view of the wheel-to-wheel racing action on the track!

Throughout the season, the speedway’s regular divisions, visiting divisions, and sanctioning groups will be showcased in special events as part of the track’s 56th consecutive season of auto racing.

The green flag will wave on the season opener at 6 p.m. Saturday, April 7, for the 360 sprint cars, super late models, and pro stocks. Grandstand gates on Opening Day will open at 4 p.m. with pit gates at 3 p.m. Race time will be 6 p.m.


Officials scheduled a pre-season practice day for any division of race car that will be competing at the track in 2018 Saturday, March 31, from 1-4 p.m.

One of the many highlights this season will be the much-anticipated May 5 visit by the Lucas Oil American Sprint Car Series in a two-race Battle of the Groves weekend with Williams Grove Speedway (May 4).

Fans should also mark their calendars for a rare mid-week show featuring Firecracker 30 main events for both the 360 sprint cars and super late models Tuesday, July 3. Pro stocks and a professional fireworks display will also be a part of the holiday celebration.

Selinsgrove and Port Royal Speedways will host the Moon Shine Camo Route 35 Dirt Late Model Series for the third consecutive season. Each track will run three races as part of this year’s enhanced series, with Selinsgrove’s dates slated for May 19, July 21, and Aug. 11.

The Northeast Ultimate Super Late Model Series will make its first-ever appearance at the track June 9 for the Showdown on Sand Hill. On the same night, the Mason Dixon limited late models will also make their first stop at the track.

The Craftsman World of Outlaws Late Model Series will be back with a new date for the $10,000-to-win 20th Anniversary Jeff’s Auto Body & Recycling Center Late Model National Open Sept. 22.

The popular and competitive pro stocks will have the most events at the track this year with 23 dates including the A&A Auto Stores Pro Stock 20 April 28. The Collier Paving Roadrunner 20 will be run June 23.

The 410 sprint cars will take the spotlight several times this season in the Ray Tilley Classic April 22, PA Speedweek Finale July 8, and in the $10,000-to-win Jim Nace Memorial/36th Annual National Open Sept. 15 sanctioned by the Arctic Cat All Star Circuit of Champions.

The season will conclude with the mega motorsports event The World Series of Dirt Racing featuring no less than 10 different divisions of racing under the promotional reigns of Richie Tobias and Doug Rose Oct. 11-14.

Various classes of karts will be featured in special Pro Series races during the season and the Burris Money Series (BMS) events have been scheduled for April 8, May 20, and July 15. The annual Middleswarth Potato Chips Firecracker Special for go karts will be held June 29.

The annual Motorsports Show at the Susquehanna Valley Mall is slated for Sunday, Feb. 25 through Friday, March 2. Teams can register their race cars for the show now by emailing publicrelations@selinsgrovespeedway.com or calling 570.523.8420.

For the latest news and the full 2018 schedule of events, visit selinsgrovespeedway.com or follow us on Twitter and Facebook. The speedway office can also be reached at 570.374.2266.