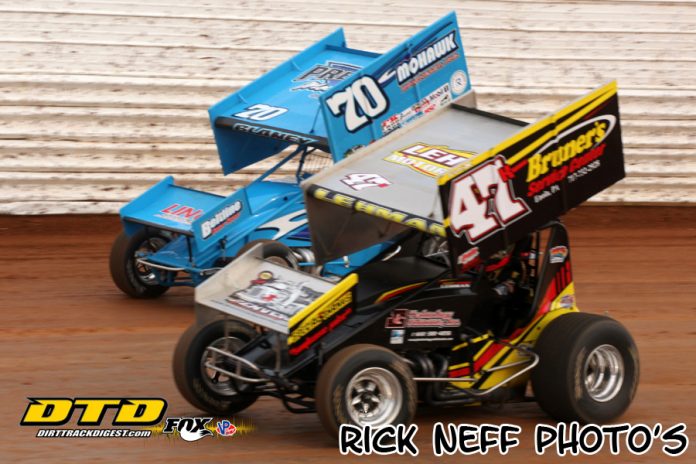 PORT ROYAL, PA. – It was a great night for the Blaney family in racing “circles” on Saturday as veteran sprint car driver Dave Blaney of Mooresville, NC., took his fourth career victory at Port Royal Speedway in Pennsylvania while his son Ryan Blaney scored the NASCAR Xfinity Series race at Texas Motor Speedway.

To get his fourth career win at Port Royal worth $3,600, “The Buckeye Bullet,” Dave Blaney had to drive by Greg Hodnett and then out-gun Lucas Wolfe to the checkers.

In the 22-lap super late model main, Selinsgrove’s Dylan Yoder took the $2,000 payday after a battle with Nick Dickson and an attempt at stealing the lead at the hands of Coleby Frye.

The 18-lap 305 sprint main was scored by Jeff Miller of Huntingdon after a crash in the final turn took out the leader.

Hodnett started second in the 25-lap 410 sprint car main with Blaney taking the green from the third position and Wolfe in 10th.

The caution appeared early in the event, with two laps scored when Parker Price-Miller spun high in the fourth turn and collected Jason Shultz and Joe Kata.

Hodnett held command for the restart with Kody Lehman and Blaney following.

Blaney snagged second from Lehman at the new green and then stuck with Hodnett, not allowing him to “check out” as the race entered the rear of the field with eight laps away.

Racing through traffic, Blaney was able to narrow Hodnett’s advantage before the second caution flag of the race unfurled with 11 laps to go for a spin by Aaron Reutzel who was up to sixth after starting the race in 14th.

Blaney blasted across the bottom and middle of the first corner on the restart to drive by Hodnett and take command of the event while Lucas Wolfe restarted third.

Wolfe was working well on both sides of the track and overtook Hodnett for second with nine laps to go.

Blaney then raced to stay ahead of Wolfe as he came up on the rear of the field during the final five laps but Wolfe was clearly closing as the two-to-go sign came out.

Wolfe had just one shot to steal the win and it came with a deep, third turn dive and swoop to come up off the bottom in the fourth turn with the lead, just in front of Blaney.

But Blaney turned the car down off of the cushion as the pair raced out of the fourth turn and drew back to Wolfe’s inside as they sped toward the checkers, mustering just enough power to retake command as the finish line neared, posting a .312 second margin of victory.

Second starter Nick Dickson would lead the first 10 laps of the super late model main before losing the lead to Dylan Yoder.

Yoder and Dickson waged a spirited battle for control for several laps before Yoder was finally able to muscle control away.

In fact, just before Yoder came up with the lead, he was wound up in a three-car battle for control, squeezed in between Dickson and an advancing Coleby Frye in the fourth corner.

And it was out of that squeeze play that Yoder took command, just before the first yellow flag of the race unfurled with 11 laps away.

Dickson failed to challenge on the restart and then ended up withdrawing from the event as Frye assumed second with Andy Haus in third.

Restarts with 14, 17 and 20 laps in the books found Haus challenging Frye for second but to no avail and each time Yoder was able to pull away.

It was the 13th win of Yoder’s Port Royal career, coming by 1.073 seconds over Frye, Haus, Andrew Yoder and Mike Lupfer.

Heats went to Lupfer and Haus.

Nick Sweigart led all but the final lap of the 305 sprint main, falling victim to an increasingly ragged outside cushion.

Sweigart had Austin Bishop challenging during the first half of the race and then found Jeff Miller in pursuit during the second half.

With a few laps to go Sweigart clouted the outside first turn wall but saved the car and his lead as he appeared headed to a first ever Port Royal win.

But that outside wall bit again, this time as he sailed near it in the third and fourth turns where he ended up riding the wall before losing control and spinning as he headed to the checkers.

This handed the lead to Miller who made good on his fortunes to pick up the win.