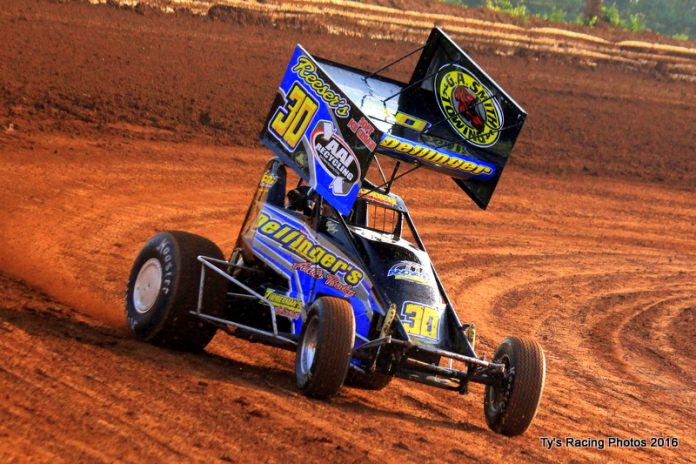 YORK HAVEN, PA – Scott Dellinger mentioned a couple of weeks ago that he was more concerned with wins than backing up a championship.

It looks like he is taking care of both in early-season Super Sportsman action at BAPS Motor Speedway.

For the second straight week, Dellinger crossed the line first in the 25-lap Super Sportsman main event. The win was worth $1,000 and put the 2017 division champion 25 points ahead of Frankie Herr in the standings.

“This is the first time I’ve ever won back-to-back features,” Dellinger said. “Hats off to my crew and everyone for working hard.”

A week ago, Dellinger had to orchestrate a late-race pass on Herr to land in Victory Lane. It wasn’t near as difficult this week.


Dellinger drew the outside pole, which put the rest of the field in a bad way from the start. He beat Chris Meleason off the start and made it through Turns 1 and 2 with the top spot in hand.

Once out front, Dellinger was in a race of his own. The only thing that slowed his pace was a caution on Lap 21, when Justin Foster rolled to a stop and a red flag with one lap to go in the main event.

It didn’t matter. Dellinger was the class of the field and dominated the final restart to take the win over Kenny Edkin, who charged from eighth. Meleason was third, followed by Chase Gutshall and Russ Mitten.

Doug Dodson was hard charger, advancing from 21st to 10th. Herr, Edkin, and Mike Enders were heat winners for the 30-car field. Nate Young topped the field in the consolation event.

While Dellinger dominated the Super Sportsman event, the rest of the features were in doubt to the end.

Jasen Geesaman provided the most excitement in the 20-lap Street Stock feature by pulling off an epic charge from 24th to first to claim the win.

There were six lead changes in the first 19 laps. Ryan Smith and Brian Walls swapped the lead four times in the first 10 laps before Eric Tripp took control of the race on Lap 11 and was poised for the win.

That all changed when Geesaman took second and reeled in Tripp. Geesaman grabbed the top spot on the final circuit to claim an entertaining win. Tripp settled for second, with Smith, Kyle Saylor, and Walls completing the top five.

Saylor and Joey Hoffer were heat winners for the 25-car field. Geesaman won, so he wasn’t eligible for hard-charger honors. Kyle Martin took the honor by advancing from 25th to 11th in the final rundown.

Alex Bright made a late-race charge to the front to capture the 20-lap USAC Midget portion of the program.

Bright started fifth on the grid and stalked the frontrunners for most of the race. Adam Pierson started on the pole and was in control until Bright surged by on the 19th circuit.

Once out front, it was all Bright, who took the win. Pierson settled for second, followed by Tommy Kunsman, Ryan Wilson, and Shawn Jackson. Andrew Layser and Bright were heat winners for the 19-car field.

Alex Schmiedel lost the lead early but rebounded to take the victory in the 20-lap Central Pa. Legends main event.

Scott Houdeshell unseated Schmiedel at the front of the field on Lap 4 but bounced back to retake the lead two laps later. There were some close calls over the final 15 circuits, but Schmiedel took the win.