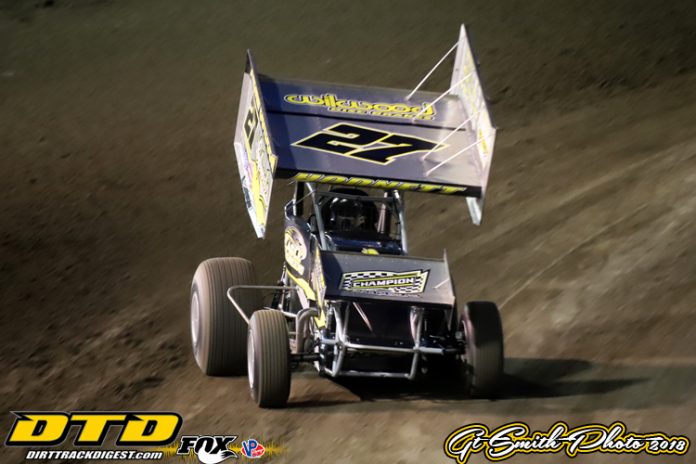 Port Royal, PA – Greg Hodnett won his first sprint car feature of the season at Port Royal Speedway on Saturday night, taking the $3,600 win after getting by Rick Lafferty for the lead.

In the 30 lap ULMS Chiller Thriller for super late models, Jason Covert drove by Matt Cosner for the lead and $3,000 victory.

Lafferty and fellow front row starter Blane Heimbach drag raced each other through the first and second turns when the green came out in the 25-lap 410 sprint car main with Lafferty surging ahead as the pair hit turn three.

The first caution flag of the race unfurled on the fifth lap finding sixth starter Hodnett racing fourth for the restart.

Hodnett rallied around Mike Wagner for third at the new green and then went to work on Heimbach, whom he motored by on the eighth tour just before another yellow flag regrouped the field.

Hodnett blasted around Lafferty on the restart to take the lead before beginning to pull away.

Lafferty was fighting a flattening nose wing prior to losing the lead and the problem persisted later in the race as Heimbach zeroed in for second as Hodnett began working the rear of the field on the 17th lap.

Heimbach took second from Lafferty with seven tours to go but was unable to run down Hodnett, who cruised to his 51st career oval win by 4.490 seconds.

Logan Wagner, who fell backward from his third starting spot when action began, climbed back into contention during the event, taking third from Lafferty with six laps left.

Wagner was in the process of running down Heimbach at the finish.

Heats went to Hodnett and Lafferty.

A field of 42 super late models competed in the 30-lap Chiller Thriller for the United Late Model Series drivers and the main event saw no less than three leaders.

Kenny Moreland and Boom Briggs started the feature on the front row with Briggs taking the lead over Moreland and Matt Cosner on the start.

A fast caution with only one lap completed bunched the field and Cosner motored by Moreland for second on the restart.

Another restart on lap seven saw Cosner battling Briggs for control with Cosner nipping him for the lead at the line as the ninth loop was scored just before Moreland spun his mount.
Fifth starter Jason Covert lined up third for the restart and quickly dispatched Briggs for the runner up position before immediately challenging Cosner for the lead.

A swoop across the low side of the first and second turns netted Covert command on the 11th tour, leaving Briggs and Cosner to duke it out for second, which they did for several laps around the halfway point.

Briggs passed Cosner for the spot on more than one occasion only to see Cosner regain the position as now Jeff Rine entered the picture along with Mike Maresca.

Both Rine and Maresca came storming to the front, racing hard together as they got by Cosner with 10 laps go to.

The pair leaned on each other repeatedly for second while still keeping their mounts under control with Rine finally securing the spot with three laps to go.

It was however Covert’s event to win and the victory was his third at the historic Port Royal over, coming by 1.625 seconds over Rine.

Andrew Yoder wired the field from the pole to win the 18-lap econo late model feature over Derick Garman.

Garman lost second to Devin Hart on lap 13 but came battling back to reclaim the spot at the finish as a wild three-car race for second unfolded between he, Hart and Jeremy Ohl.

Yoder’s advantage at the line was 1.357 seconds.

Bill Powell led all 15 laps of the xtreme stock main to win his second race of the season.