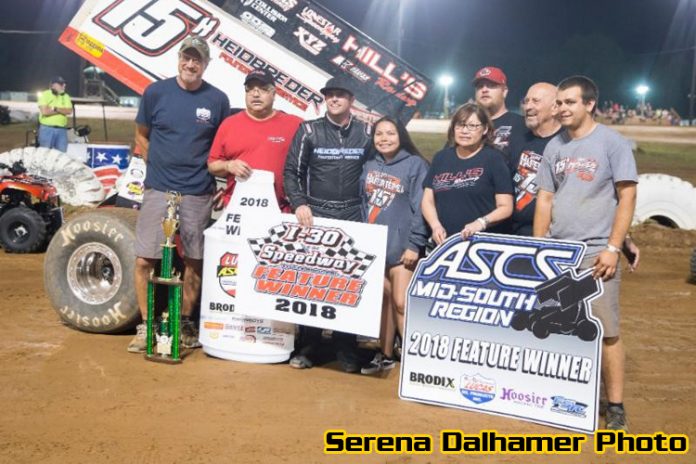 Bryan Hulbert – LITTLE ROCK, Ark. (May 12, 2018) Scoring his first victory of the 2018 season with the Lucas Oil American Sprint Car Series presented by Sawblade.com, Sam Hafertepe, Jr. had to hold off Sammy Swindell to get the job done at I-30 Speedway this past Saturday night.
Entering Saturday fourth in tour standings, Sam leaves I-30 Speedway tied with Seth Bergman for the National Tour point’s lead with the nod to Bergman who has a pair of wins on the season.

“For the fifth night on this car, we’re making strides. Jack Elam called me, and he asked if there was anything he could do, and I said it wasn’t anything a little wrench won’t fix. We’ve been working hard the last couple days. We were really disgusted after Lakeside to start on the front row and fall back like we did, but to come out tonight and start fifth and get to the front it was awesome, and winning on Mother’s Day Weekend, I have to just thank my Mom and wish her a Happy Mother’s Day.”

Taking the lead with a Lap 15 pass through turns three and four on race long leader Derek Hagar, the two-time National Tour Champion was joined at the front by Swindell on Lap 18. Clawing his way to second from the 16th starting spot, a restart with three laps to go locked Sammy on the back bumper of the Heidbreder Foundation No. 15h.

“Sammy just had an unfortunate Heat Race. It was one of the last ones where the track changed to the bottom where it was hard to pass, so that’s why he had to start that far back, but I knew he’d be coming. He’s got this track’s number and we all know that he’s the guy we have to hold off no matter if he started 16th of 20th, he’d be coming,” stated Sam on the front straightaway.


Working Lap 2, the red lights blinked on as Seth Bergman flipped going into turn three. Seth was unharmed, and the race resumed with Hagar starting to put distance over the field. Still chasing Wayne Johnson for second, Hafertepe worked multiple grooves with the No. 2c able to hold until Lap 11 when the cushion in the first turn bit, and sent Wayne flying. Able to stay upright, Wayne rejoined at the tail.

Taking over second with Sammy Swindell already up to third, Hafertepe kept pace with the No. 9jr before finally diving to the lead through the third and fourth turns on Lap 15. Caution working Lap 17 for Skylar Gee who slowed drastically in turn-three with the field bearing down, the laps rolled back to 16 complete with Hafertepe taking off with the lead.
Slowed again on Lap 19, Swindell was all over Hafertepe for the lead. Able to utilize the center through turns one and two to keep his momentum up, Swindell pulled even with Sam at one point, but would not be able to complete the pass. Never out of striking distance, it was high-speed chess as the pair began racing among the back makers, only to have the caution waved for the final time with three laps to run.

Taking the center through the first and second turns to try and get a run on Hafertepe for the lead, Swindell still trailed with all other attempts coming up short.

Sammy’s 33rd career podium finish with the Lucas Oil American Sprint Car Series presented by Sawblade.com, the wily veteran was joined by three-time National Tour Champion, Tim Crawley, who advanced from the 11th starting spot. Along with Sammy, the “Crawdaddy” was among the few who could make the top of the track work in the feature.
Derek Hagar held on to finish fourth with Marshall Skinner making up the top-five. Picking up the CP-Carrillo Hard Charger of the Night, Howard Moore advanced position 15 times to finish sixth. Oklahoma’s Tyler Thomas from 15th crossed seventh with Blake Hahn eighth. Matt Covington put on a charge from 17th to ninth with Johnny Herrera finishing 10th.

Next for the Lucas Oil American Sprint Car Series presented by Sawblade.com will be the start to Speedweek at West Texas Raceway in Lubbock, Texas on June 8.