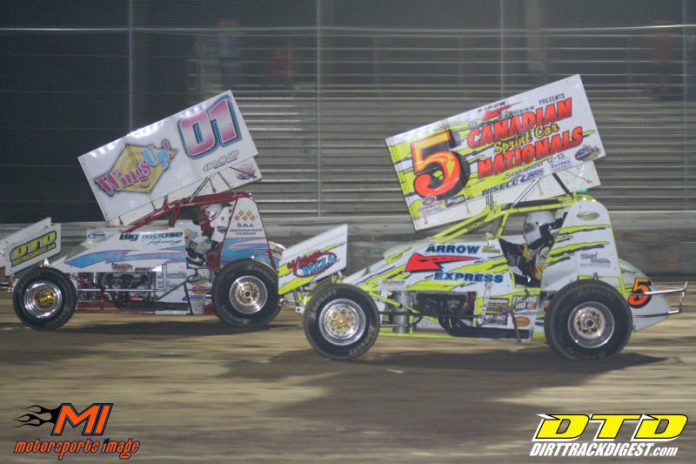 A stalwart competitor during the Ohsweken Speedway’s formative years, Fred Carleton won the Sportsman Modified championship in the track’s second season (and first under DIRT sanctioning) in 1997, and became the division’s first two-time champ in 1999. Carleton’s 18 feature wins between 1997 and 2000 rank him third all time on the track’s Sportsman Modified win list.

Moving from asphalt to dirt in the late 90’s, Keith Dempster quickly became a force to be reckoned with whenever Sprint Cars raced at Ohsweken Speedway. Dempster’s nine career feature wins at Ohsweken place him sixth all time on the track’s 360 Sprint Car win list, including a streak of five consecutive years with at least one win between 2000 and 2004. He claimed a memorable win in the 2003 Canadian Sprint Car Championship at Ohsweken, and won the championship during the track’s inaugural season of weekly Sprint Car racing in 2008.

Kelly Hallett is tied for fifth on the all time Ohsweken Speedway Mini Stock win list, and claimed back-to-back track championships in 2000 and 2001. Along with his on-track accomplishments, Hallett also helped to change the way Mini Stock cars were constructed, and ushered in a new era of competition and growth in the division.


The husband and wife team of Ken and Cheryl Pelkie were instrumental in many of the things now taken for granted at Ohsweken Speedway. During his time as General Manager, Ken oversaw the creation of the Canadian Sprint Car Nationals, the inaugural Six Nations Showdown featuring the World of Outlaws Sprint Car series, and the addition of the 360 Sprint Car division to the weekly racing program, to name just a few. Meanwhile, Cheryl and other Pelkie family members handled ticket sales, registrations, and many other essential behind-the-scenes jobs.

The community is invited to submit nominations for induction to the Wall of Fame, and all nominations are given due consideration. The number of inductees in any given year shall be at the discretion of the Wall of Fame committee. The names of inductees for any given year are announced in early spring, and the official induction ceremony is held at Ohsweken Speedway on a selected race night during the subsequent season. The Styres Family, the Southern Ontario Sprints club, and Mike “Pinball” Giberson were selected for the inaugural class of Wall of Fame inductees in 2015, while Jay Mallory, Jim Swing, Abel Castelein, and the Bell Family were inducted in 2016, and Jim Cochrane, Gale Hill, Tom Huppunen, Clinton Geoffrey Kruchka, and Adam Ross were honoured in 2017.

TICKETS PLEASE!
The 2018 Canadian Sprint Car Nationals weekend is back on schedule and set for Friday, September 14, and Saturday, September 15! Renewals are now open for ticket holders from the 2017 Canadian Sprint Car Nationals until Thursday, May 17, 2018. All remaining seats will be available for sale to the general public beginning on Friday, May 18, 2018, when Ackland Insurance presents the 23rd Annual Opening Night at Ohsweken Speedway. Visit www.OhswekenSpeedway.com or call 519-717-0023 for more information.