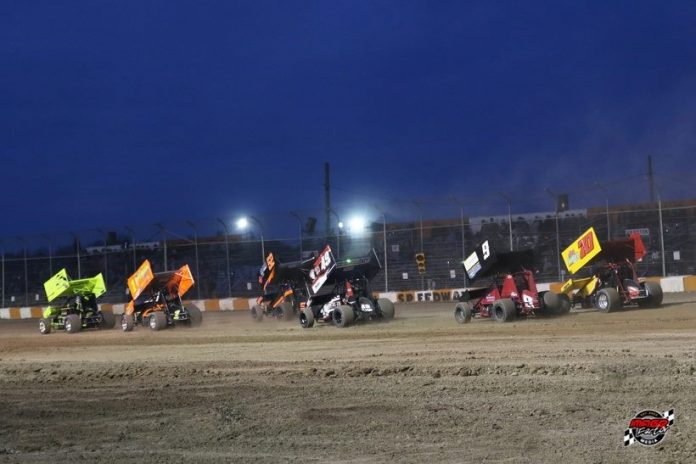 OHSWEKEN, ONT – Ohsweken Speedway is set to resume Friday Night Excitement action and wrap up the month of May with McDonald’s of Brantford and Paris night on Friday, May 25. Track officials have been hard at work this week as they continue to prepare the racing surface for the upcoming week’s action featuring the Kool Kidz-Corr/Pak 360 Sprint Cars, Strickland’s GMC Crate Sprint Cars, Middleport Mechanical Thunder Stocks and HRW Automotive Mini Stocks. Race time is 7:30pm with grandstand gates opening at 6:00pm. Adult admission is just $14 while Seniors (65+) and Youths (13-17) are only $10. Kids aged 7-12 are only $3 and Kids 6 and under are free. This pricing is in effect for all weekly racing shows.

Strickland’s GMC Crate Sprint Cars
The drivers in the Strickland’s GMC Crate Sprint Car division are coming off a busy weekend that featured a pair of races. Last Friday’s race was a double points night for both track points and with the upstart Action Sprint Tour powered by RaceRivalz.com when Aaron Turkey scored the victory. Several drivers also made the trip with the tour to Merrittville Speedway where Shone Evans picked up the win. Jesse Costa finished in the runner-up spot last Friday night ahead of the night’s chard charger, DJ Christie. Rookie pilot Lucas Smith made a splash in his debut with a fourth-place finish while Evans earned a top-five in the 2018 lid lifter.


HRW Automotive Mini Stocks
The HRW Automotive Mini Stocks will see a new champion in 2018 after Mark Bazuin made the jump to the Thunder Stock division. Nick Masi made a statement on opening night that he intends to challenge for the title as he dominated from the drop of the green flag and led all 15 laps to claim the opening night victory. He held off Dusty DeBoer who held down second for the balance of the race while Bobby Tolton came from the 22nd starting spot to finish third. Behind them, a flurry of three and four-wide racing resulted in Sean Iftody and Jonathan Ayrton claiming the final spots in the top-five.

About McDonald’s Restaurants of Brantford & Paris: McDonald’s restaurants have served the world some of its favourite food since 1955. McDonald’s is more than just your local restaurant. They’re hardworking small businessmen and women, students working part-time, seniors getting the most out of life, and volunteers lending time to make a difference in the communities they live and work in. McDonald’s locations in Brantford include 73 King George Road, 27 Stanley Street, 300 King George Road, and 299 Wayne Gretzky Parkway, while they’re also in Paris at 307 Grand River Street North. Grab a bite to eat on the way to the races, or visit the drive-thru on your way home. Visit www.McDonalds.ca for more information.

About Ohsweken Speedway: Founded in 1996, Ohsweken Speedway’s wide and fast 3/8 mile clay oval track is Canada’s Home for Sprint Car Racing Action! The facility is owned by the Styres family, and located in the village of Ohsweken, Ontario, Canada. Situated 20 minutes southeast of Brantford, 30 minutes southwest of Hamilton, just over 60 minutes from Niagara Falls, and 90 minutes from downtown Toronto, Ohsweken Speedway is easily accessible to fans from all over Southern Ontario and beyond. Ohsweken’s Friday Night Excitement program runs from May to September each year, featuring 360 Sprint Cars, Crate Sprint Cars, Thunder Stocks, and Mini Stocks, while future stars start their careers racing in the track’s weekly Thursday Night Micro Sprint program. The season finishes each year with the track’s signature event; drivers and teams from all over North America converging on Ohsweken for the annual Canadian Sprint Car Nationals weekend.