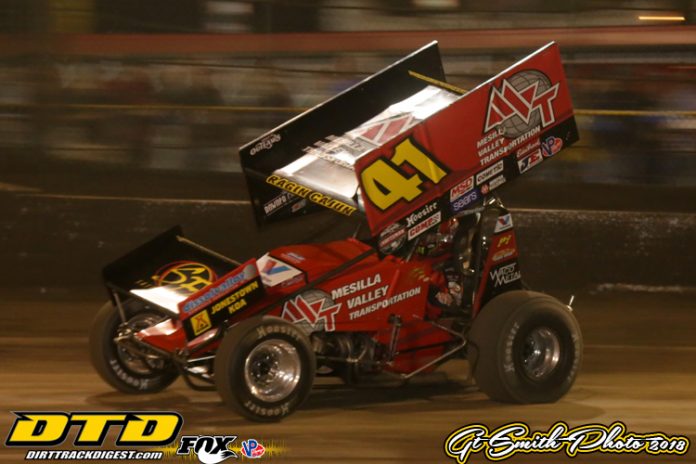 JACKSON, MN  – Jason Johnson came from seventh and passed Daryn Pittman on Lap 16 on a lightning-fast surface at Jackson Motorplex to score his first World of Outlaws Craftsman Sprint Car Series Feature victory of the year on the opening night of the AGCO Jackson Nationals. Pittman settled for second with his Kasey Kahne Racing teammate Brad Sweet completing the podium.

Lynton Jeffrey broke the Jackson Motorplex track record in Qualifying and followed that up with a Heat Race victory and a dominating performance in the Sears Craftsman Dash to earn the pole for the 30-lap Feature alongside Daryn Pittman.

Jeffrey, in search of his first career Outlaw victory, led the opening lap after going wheel-to-wheel with Pittman the entire way around the 4/10th oval.

A caution for Matt Juhl with four laps complete lined Jeffrey and Pittman next to each other again. As he did on the original start, Pittman stayed right with the Australian while Jason Johnson went four wheels above the cushion in turns one and two to move into third. A caution the following lap for Cory Eliason bunched the field together and set up another double-file restart.

This time, Jeffrey got the front two tires up, axing all momentum, allowing Pittman to lead into turn one and Johnson to take second down the backstretch. Brad Sweet pounced into third the following lap, shuffling the early-race leader back to fourth. The final caution of the night came on Lap 9 when Scotty Thiel came to a stop.

Pittman controlled the restart and reached lapped traffic quickly on the heavy surface. Pittman cleared the first few lapped cars, but his Kasey Kahne Racing No.9 was visibly tightening up in lapped traffic. Johnson continued to lurk and got underneath Pittman for the lead coming to the line on Lap 16. Johnson distanced himself from Pittman, who now had his hands full with his teammate, Sweet.

Pittman and Sweet exchanged a pair of close-quartered slide jobs, with Pittman eventually able to re-solidify himself in the runner-up position. The battle between the two KKR cars allowed Johnson to check out.

The Eunice, LA native navigated traffic masterfully, as he was able to continually put his Jason Johnson Racing No.41 higher on the racing surface while maintaining speed. Johnson went on to win his first Feature of the year by 3.431 seconds.

“I did everything but turn over in the Dash, but I was able to find some grip up top. It’s an honor to be in Victory Lane and race in front of a huge crowd. It’s amazing what everyone at Jackson Motorplex has done with the facility,” an elated Johnson said. “We’ve been so close to victory this year, it’s great to get one. I always like the tracks that have a little more grip to them,” Johnson added with a smile.

Daryn Pittman was understandably disappointed after giving up the lead at the halfway point but acknowledged that Johnson was likely the superior car in the event. “Leading races and running second is always disappointing, but Jason did a great job. I’m happy with the speed we have had the past couple of weeks and to have another solid night,” Pittman said before echoing Johnson’s statement about the improvements at Jackson. “This place is really cool and we are all glad to be here, hopefully, Mother Nature will cooperate tomorrow.

Brad Sweet was content with his podium run, “Thinking of the big picture, we need to stay in the hunt. It’s good to have some points heading into tomorrow because you never know what you are going to get with a day show.”

The AGCO Jackson Nationals continue tomorrow afternoon with the make-up event from Thursday. Hot Laps are scheduled for 1pm local time. The doubleheader will be completed Saturday evening, as scheduled, with the Jackson Nationals Feature paying $40,000 to win and $3,000 to take the Green Flag. If you can’t make it to the track, catch every lap on DIRTVision.com!