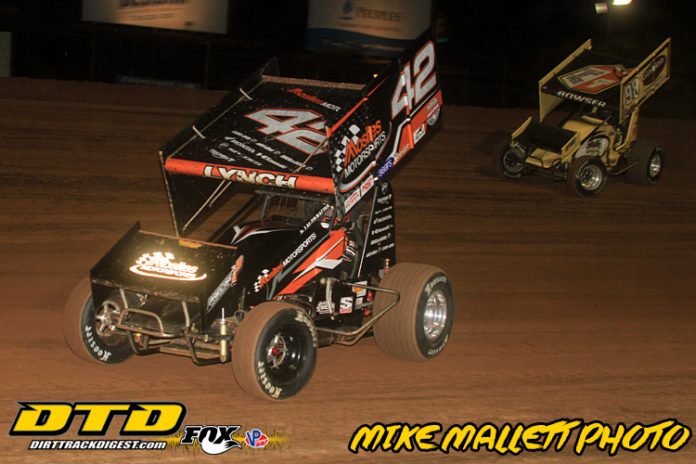 FRANKLIN, PA – Tri-City Raceway Park hosted the Father’s Day Shootout. The 410 Sprint Cars returned to the spacious half mile for the first of three appearances presented by the Donovan & Bauer Auto Group. Taking the win was third-generation driver Sye Lynch, who joined his grandfather (Ed, Sr.), and father (Ed, Jr.) on the winner’s list at Tri-City. Sye is now in position to grab some of the extra cash offered by Born 2 Run Lubricants, a division of Hovis Auto Supply.

Getting the win in the prestigious Bill Emig Memorial for the RUSH Late Models was Brady Wonderling. Brady joined his brother, Jeremy, as a winner of this event. That portion of the program was courtesy of AMP Electric. Scoring in the Hilltop Hardware RUSH Sprint Cars was Arnie Kent, aboard his 2003 J & J chassis.

Lynch was humble in receiving the accolades from the fans, many of whom saw his father and grandfather race and win, at the speedway. “My dad did a lot of things at this track, and he did a lot at Lernerville (Speedway), too, and it’s really, really, big shoes to fill. I just hope that this is the beginning of something great.” Lynch gave props to his nemesis throughout the race, George Hobaugh, Jr., who was gunning for his first 410 Sprint Car career win. “I give Hobaugh a lot of credit,” Lynch said. “He raced me clean. It was a lot of fun tonight,” a sentiment that Hobaugh shared.

Michael Bauer and Brent Matus had the front row for the 25 lapper. Before things could get started, however, Matus tangled with the push truck when getting fired off. Matus sustained heavy damage to his wing and flattened his right rear tire. Track officials gave him adequate time to make the needed repairs, which were accomplished with the help of numerous volunteers from other racing teams. Matus was able to retain his starting position, as did his son, Brandon, who hustled to the pits to lend assistance to his father.

Michael Bauer got the lead when the race officially started. Brent Matus fell in line ahead of Brandon Matus, George Hobaugh, Jr., and Sye Lynch. On lap two, the running order was shuffled, with Brandon taking second and Hobaugh third.

By lap five, the youngest member of the Matus clan had the lead, with Bauer nipping on his heels. Hobaugh held third, and Brent Matus fourth. Lynch continued in fifth, with a surprising Vincent Daugherty in sixth with his 305 powered machine.

On lap eight, Brandon Matus’ good fortune came to an end, when he spun between turns one and two. That gave the lead back to Bauer, who was trailed by Hobaugh, Brent Matus, Daugherty, and Bryan Salisberry.

On the restart, Hobaugh and Lynch fanned out behind Bauer. With Bauer hugging the bottom
and Hobaugh in the middle, the leaders raced through turns one and two, Hobaugh powered off the corner with the lead heading into the long back chute. Soon thereafter, Lynch took to the high side to drive by Bauer.

At the halfway mark, Hobaugh was leading Lynch and Bauer. Brent Matus continued in fourth, followed by Daugherty and Brandon Matus who came from the tail.

As the laps clicked off, Lynch drew closer to Hobaugh. On lap 17, he came down off the cushion in turns one and two. He used the inside line to take command. Hobaugh hung tough, and got his nose under Lynch, who went back to familiar territory on the high side.

The last five laps were a nip and tuck battle between Lynch and Hobaugh. Hobaugh did regain the lead briefly coming off the inside of turn two with two to go, but Lynch rolled the top in turns three and four to take the lead back again. Lynch explained, “Hobaugh threw a slider, it was great, I never lifted through ,” as he gestured towards turn four. “I was either going to stick or I was going to hit the wall, one of the two.”

Lynch did stick the corner, and he held control to the finish, with Hobaugh a very close second. Bauer crossed in third, ahead of Daugherty and Brandon Matus. Jack Sodeman, Jr., Aussie Jessie Attard, Central Pennsylvania invader Jordan Givler, Salisberry, and Brent Matus.

Jason Genco and Brady Wonderling paced the field for the start of the Emig Memorial. Adam Ferri and Jason Knowles had row two and Brian Knowles and Jeremy Wonderling in the third.

A caution with just a lap to go set up a fierce battle for the positions behind Brady Wonderling.
Wonderling was a bit concerned that his car might overheat during the caution, but his worries were unfounded. “The caution came out and I hated to see that caution because it starts spitting water, but we were able to keep it rev’d up and to cool it back down.” Wonderling’s other concern was that somebody might get overly aggressive on the outside on the restart. “i was able to get the get go,” he said, as he cruised to the win.

Brady Wonderling and Jason Genco copped the pair of heats for the RUSH Late Models, presented by AMP Electric. The evening’s fastest qualifier was Brady Wonderling, who toured the speedway in 20.423 seconds. Genco took the dash.

Arnie Kent led wire to wire in the Hilltop Hardware RUSH Sprint Cars. Chad Ruhlman gave chase, but could not get close enough to make a pass. Kent said, “I knew that if I stayed on the bottom, he (Ruhlman) was going to have to push it real hard to get around me on the top, so I was just kinda afraid that I was just taking it too easy on the bottom. I was trying not to slip up.”

The RUSH Sprint Cars raced under the banner of Hilltop Hardware. A pair of heat races were held, with victories tallied by Chad Ruhlman and Gale Ruth, Jr.

Leading the way in the Born 2 Run Lubricants Sprint Car Series is Sye Lynch, with 58 markers. Hobaugh has 57, and Bauer 53. Rounding out the top five in the chase for the point fund is Brandon Matus, with 50 points, and Vincent Daugherty, with 49.

Round two of the Born 2 Run Lubricants Sprint Series, presented by Hovis Auto Supply, will be on Sunday, July 15, when Tri-City Raceway Park hosts the Summer Sizzler. Joining the powerful 410 Sprint Cars that evening will be the RUSH Sprints, the RUSH Modifieds, and the Penn-Ohio Pro Stocks. General Admission will be $15 for adults and $5 for students. Children (ages 12 and under) will be free.Pit admission will be $35, and the Family Pass will be available for $40. The Summer Sizzler will carry a raindate of Sunday, July 22.