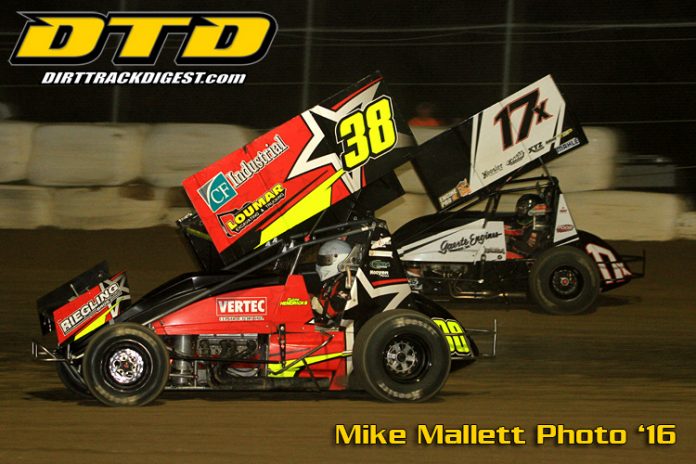 OHSWEKEN, ONT – After a highly entertaining start to July that saw another competitor earn his first career when Lucas Smith claimed the Strickland’s GMC Crate Sprint Car feature, Ohsweken Speedway is thrilled to return to action for Kids Bike and Sponsor Night presented by Strickland’s GMC on Friday, July 13.

This week’s Kids Bike Night is a popular night among all fans as drivers from all four weekly divisions purchase bikes to give away to junior fans of all ages. Last season, over 60 bikes were given away. With more than 110 cars signing into the pits each Friday this season, Ohsweken officials expect even more this season.

This week’s edition of Friday Night Excitement is also Sponsor Night, as each race team is afforded the opportunity to invite as many as four of their sponsors to enjoy a night at the racetrack, free of charge.

Dylan Westbrook’s fifth win of the season in Kool Kidz-Corr/Pak 360 Sprint Car weekly competition extended his point lead to 46 points over Caistor Centre, Ont. driver Cory Turner, who rebounded from a heat race wreck last Friday to finish eighth in the main event. Jim Huppunen of Fenwick, Ont. sits third in the standings, 24 points back of Turrner, but only a single marker ahead of Pain Court, Ont. driver Tyler Hendricks. Mack DeMan of Mississauga, Ont. occupies fifth in the standings, only three points back of Hendricks. Ryan Turner, Mike Thorne, Chris Steele, Jamie Turner, and Mikey Kruchka round out the top-10.

Nick Masi scored his fourth win of the season last Friday night in HRW Automotive Mini Stock action to retake the point lead from ‘Cheeseburger’ Sean Iftody. The advantage currently sits at eight points, while Gillian Hils is exactly 30 points back of Masi for the division lead. Dusty DeBoer is 23 back of Hils in fourth and Matt Nuell rounds out the top-five with a 12-point deficit to DeBoer. Jonathan Ayrton, Dale Millard, Kyle Wert, Tim DeBoer and Martin Schroeder make-up the remainder of the top-10.

About Strickland’s GMC: Strickland’s is a family owned and operated business that has been serving Southwestern Ontario for over 30 years. They have never been afraid to change in order to better serve their customers, but one thing has remained the same – they have always run their company based on the old proverb “Treat others the way you wish to be treated”. Strickland’s is the only full-line General Motors dealer in Brantford and the surrounding area, serving the community for over 90 years. Strickland’s returned as the title sponsor of the Crate Sprint Car division for a third consecutive season in 2016. Strickland’s GMC is located at 19-21 Lynden Road in Brantford, at the intersection of Lynden Road and Wayne Gretzky Parkway, and just 15 minutes from Ohsweken Speedway. Visit Strickland’s GMC online at www.Stricklands.com or call them at 1-800-599-5558.