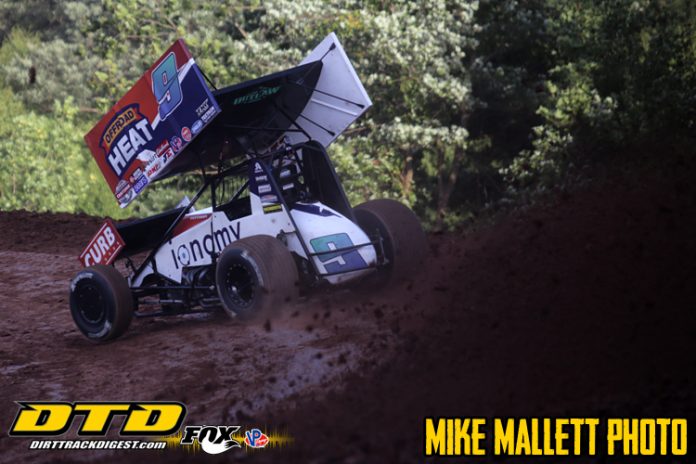 CONCORD, NC – Extending the Month of the Money into August, and leading into the legendary Knoxville Nationals, lies the longest and most challenging Sprint Car race on the World of Outlaws schedule: The Ironman 55. Now in its tenth year, the two-day event at Federated Auto Parts Raceway at I-55 in Pevely, MO will be the biggest one yet, with 55-lap, $20,000-to-win, $1,000-to-start Features on both Friday, August 3 and Saturday, August 4.

Yesterday’s bad luck is today’s good fortune. Last year, Mother Nature rained out the final night of the Ironman, resulting in a yearlong postponement of the 55-lap Feature and setting up a massive 2018 Ironman weekend, like never before. To help fans and drivers alike celebrate the historic weekend, the track is offering free camping.

While the event itself began a decade ago, Federated Auto Parts Raceway at I-55 has been a staple on the World of Outlaws schedule since Brad Doty won the inaugural Series race in 1987. The third-mile oval is one of the highest-banked tracks on the circuit. With cars turning laps in the 10-second bracket, the extended Feature laps make this one of the most physically challenging events on the schedule.

Recently, Daryn Pittman has been dominating the bullring. Pittman won the opening night of Ironman Weekend last year and was in good position when the rain hit on the second night. Pittman followed up last year’s success at I-55 by picking up the win at the Pevely, MO facility on April 21, 2018 of this season.

“We have been really good there the last three times. Pevely has always been a track I enjoy going to, regardless of the success I have or have not had there,” Pittman, who also won at the track in 2002, said about returning to Federated Auto Parts Raceway at I-55.
Pittman has never won the Ironman 55 and knows that this year’s event is going to be as grueling as ever.


“55 laps there is a handful, and for us to do it two days in a row, it is going to be hard and tough. Whoever wins is going to earn it,” Pittman, who has four wins on the season and sits fourth in the Series Point Standings, said in anticipation of the back-to-back $20,000-to-win Features.

With the increased payday, a strong field of regional invaders will be on hand to try to steal the money from the World of Outlaws regulars. In addition to Pittman, full-time World of Outlaws drivers Kraig Kinser (2005), Jason Sides (2012), Donny Schatz (2015) and David Gravel (2015) have also visited Victory Lane at Pevely.

As usual, the Ironman 55 weekend offers fans several opportunities to interact with their favorite drivers. All reserved tickets include a free fan pit pass prior to racing. And all 24 Feature drivers will take a walking parade lap for driver intros around the third-mile oval before Saturday’s Feature, stopping and signing autographs along the way.

A strong field of POWRi Midgets will be on the card alongside the Greatest Show on Dirt in August. Tickets for this can’t miss weekend are still available online. If you can’t make it to the track, be sure to watch all the action LIVE on DIRTVision.com.