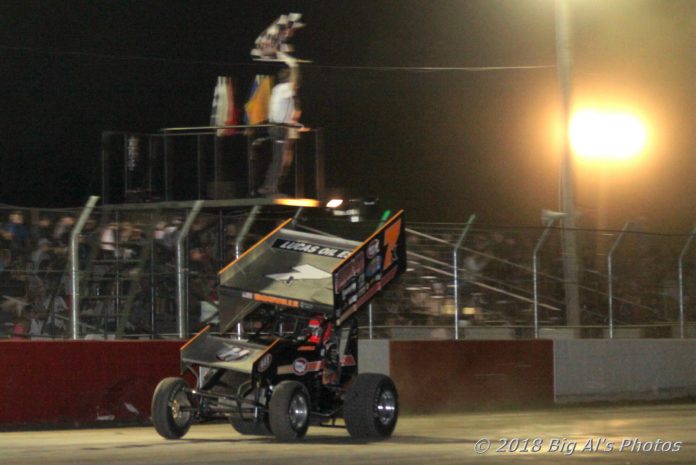 Former Devil’s Bowl Sportsman Modified champion Hackel added another chapter to his “Little Engine That Could” story, winning the first 20-lap SCoNE event with an incredible pass on the last lap. Hackel’s car competes against SCoNE’s regular 360 cubic-inch engines with a smaller 305 motor which lacks horsepower but has sharper handling in the corners.

Hackel tracked down leader Will Hull in heavy lapped traffic and darted underneath him in Turn 2, completing the pass as the checkered flag waved. Lacey Hanson came home in third place followed by Clay Dow and Adam Pierson, who made a surprise appearance with the Sprint Cars.

The second race was also decided late in the going when former series champion Danny Douville of Bridgewater, N.H., swept to the outside lane to drive from third to first after a restart with three laps remaining, snookering leader Peter Dance. Once again, Hackel drove up the inside lane, stealing second place in the final corner. Matt Hoyt had a solid run to take third ahead of Hull and SCoNE newcomer Dance.

Joey Scarborough of Brandon, Vt., put on an impressive romp on the outside in the 30-lap feature for the Central Vermont Motorcycles Sportsman Modified division, winning for the third time in the last four races. Veteran Brian Whittemore looked to be headed to victory lane, but the hard-charging Scarborough came from 20th on the starting grid to blow past a battle between Whittemore and Billy Lussier with just four laps remaining.

With the win, Scarborough moved into a second-place tie in the point standings with Tim LaDuc, and both drivers trail Tremont by 25 points, 482-457.

Brent Warren of Salisbury, Vt., ran to his third win of the season in the O’Reilly Auto Parts Limited Sportsman feature. Young guns Montgomery Tremont and Tanner Forbes took turns leading before Warren took over 11 laps in. Paolo Pascarella made a strong challenge in the final laps, but Warren held him off. Joey Roberts made a late drive through traffic to finish third, while Tremont scored a career-best effort in fourth place. R.J. Germain completed the top five.

The Limited Sportsman race was ended after 17 of 20 laps were completed due to time constraints; the finish is under review and is considered unofficial.

Joey Trudeau earned his first Super Stock win of the season in a 20-lapper. Top drivers Chris Murray and Scott FitzGerald each had a rough outing, which opened the door for everyone else; Trudeau led the early part of the race before Kevin Elliott took over, but Elliott and Murray came together to bring out a yellow flag. Hague, N.Y., racer Trudeau slipped back into the lead and cruised to the checkered flag. Curtis Condon was the runner-up over Josh Bussino, Lou Gancarz, and rookie Andrew FitzGerald.

In spite of a wreck that knocked his car out of the race, Murray holds a commanding 76-point lead in the championship standings over Condon, 648-572.

Fifteen year-old Johnny Bruno of Castleton, Vt., was a first-time winner in the Portland Glass Mini Stock division, taking a 15-lap race. The sophomore driver led every lap, but was under attack first from Shawn Moquin and later from Zach Wood and Kaleb Shepard. Wood finished second for his best run of the year, and Shepard took third driving a car borrowed from Hunter Given. Moquin finished fourth with Mike Lique fifth.

Chris Conroy was uninjured in a spectacular flip which destroyed his car and dropped him from the championship point lead; Shepard jumped ahead for the first time, with a 10-point edge on Conroy, 565-555.

Milton, Vt.’s Jessica Moquin, Shawn’s better half, scored her first win in the Ladies Mini Stock division after an intense race with Morgan Ballard, who came inches from hitting the wall as she tried to steal the win in the final lap. Jill Simonds finished third ahead of Mary Gardner and Emily Cram.

Devil’s Bowl Speedway’s next event is on Sunday, August 19, as the Fabian Earth Moving presents the third annual Charlie LaDuc Memorial 54 for the Sportsman Modifieds. Also on the card are the Limited Sportsman, Super Stock, Mini Stock, and 500cc Mini Sprint divisions, the Bandit Youth Mini Stocks, and pit area tours at intermission. General admission is $12 for adults, $10 for seniors, $5 for teens (13-17), and free for kids age 12 and under. Racing starts at 7:00 p.m.

(NOTE: Limited Sportsman finish is unofficial and under review as of 8/13/18)