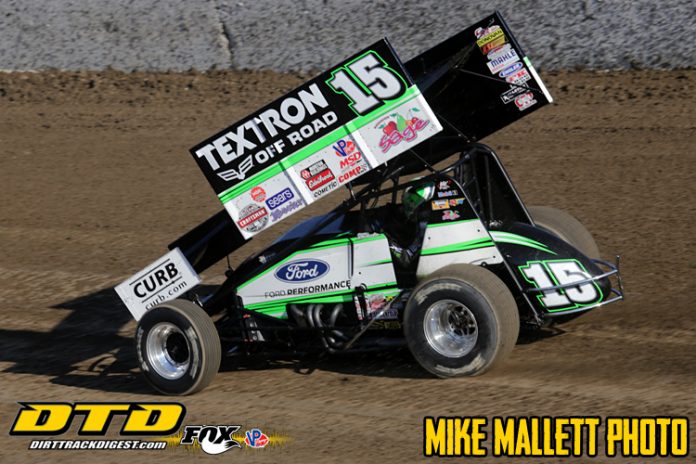 Sheldon Haudenschild won the Sears Craftsman Dash, earning the pole for the 40-lap Feature alongside recent Knoxville Nationals winner Brad Sweet. Haudenschild led the opening lap before a Red Flag for Logan Schuchart, Wade Nygaard and Brent Marks halted the action with one lap complete. All drivers were uninjured, but only Marks returned.

Haudenschild continued to pace the field as he reached lapped traffic quickly around the ¼ bullring. Sweet stalked the Ohio native and took the lead on Lap 12 on the bottom, in heavy lapped traffic.

Jordan Adams, who flipped earlier in the night but repaired his car to transfer out of the LCS, brought out the caution with 15 laps complete.

A caution on the ensuing double-file restart, set up a single-file restart. Four laps later, Ian Madsen was involved in his second incident of the Feature, this time with too much damage to continue, bringing out Open Red conditions.

When action resumed, Sheldon Haudenschild got shuffled back to fourth behind Kerry Madsen and Donny Schatz, who moved into second. Schatz set his eyes on Sweet and closed in as the duo raced through heavy traffic.

As Schatz went high to challenge for the lead, Sweet entered low into turn one and lost the handle of his No.49, spinning to a stop. Schatz assumed the lead alongside Kerry Madsen.

Schatz stormed away on the restart as the rest of the field, especially 17th-starting Mark Dobmeier, used every inch of real estate around the River Cities Speedway to advance forward.

The final restart flew with four to go and by this time Dobmeier, the all-time winning Feature leader at River Cities Speedway, had worked his way to second, trailing Schatz. The capacity crowd was bubbling with anticipation of the finish as the two North Dakota natives led the field back to Green.

Schatz pulled away in convincing fashion for his 16th Outlaw win of the year and seventh in his last eight starts at River Cities Speedway as Dobmeier finished second, picking up KSE Hard Charger honors for advancing 15 positions.

“I’m just a lucky guy. To drive for the for the best guys in the pit area, the best owner in the country and the people that build these cars. They stand behind us through thick and then,” Schatz said of his Textron Off Road-sponsored crew, Tony Stewart and J & J Chassis.

“Mark [Dobmeier] had a good run, I saw the 13 on the board and I thought, oh boy, here we go. He’s pretty good around here,” Schatz said of his fellow North Dakota native.

“Lapped traffic definitely made your hair stand up tonight, we might not have been the best car tonight, but I’m glad we could get it done in Grand Forks,” Schatz, who also won the NLRA Late Model Feature, added in Victory Lane.

The massive crowd at River Cities was pleased to see six-time winner at River Cities in 2018, Dobmeier finish second. “It’s great to have the crowd cheer like this, this is why we do it,” Dobmeier said. “I wish I didn’t use up all my tires at the beginning of the race, I wanted to start in the Dash and start in the top-ten and get that track position early, but we didn’t have it early, so I had to dig deep, I gave everything I had. Considering we got to second to this guy [pointing at Schatz], I feel pretty good about that run,” Dobmeier said with a smile.

Kerry Madsen finished on the podium once again at River Cities, “I had a big plan on the double-file restart with six to go and it didn’t work and I lost a spot,” Madsen said with a grin before complimenting River Cities Speedway. “They do such a good job with the track here, I love coming to Grand Forks.”

14th-starting Daryn Pittman finished fourth with Brad Sweet charging back to fifth. Shane Stewart, who was involved in two accidents, recovered to finish sixth. David Gravel stayed out of trouble and finished seventh.

21st-starting Brent Marks recovered from a Lap One accident to finish eighth, Hunter Schuerenburg, who went to the work area running sixth early in the race, came back to ninth with local Jade Hastings, who brought out the Yellow with 6 laps left, completing the top-ten, the first of his World of Outlaws career.

The World of Outlaws Craftsman Sprint Car Series returns to action in West Fargo tomorrow night, Saturday, August 18, 2018 at Red River Valley Speedway. If you can’t make it to the track, be sure to watch all the action LIVE on DIRTVision.com!