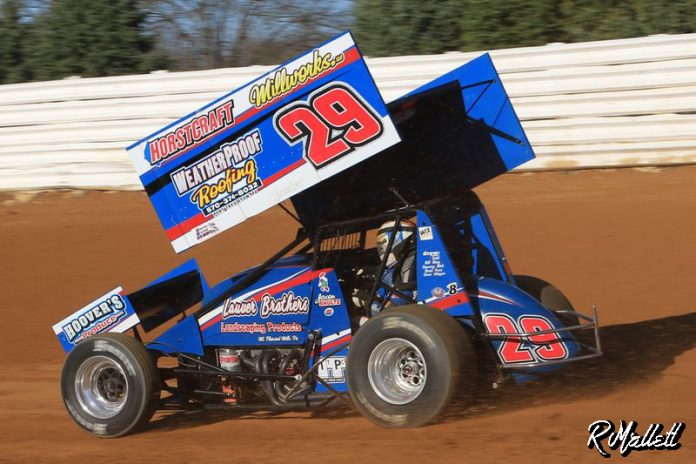 The $2,000 victory was Shultz’s 18th career at Selinsgrove in 358-360 sprint car competition at the wheel of the Horstcraft Millworks No. 29.

In the super late model 25-lap feature, Andy Haus of Hamburg stormed to his first career win worth $2,200 at the Snyder County oval and in doing so also won the Moon Shine Camo Route 35 Super Late Model Challenge Series by just four points.

Brandon Moser of Middleburg drove to his second win of the year in the 15-lap pro stock feature, while Kyle Bachman of Selinsgrove won his second career pro stock track title.

In the roadrunner 12-lap race, Ryan Zook of Mifflintown collected $650 for his fifth win of the year. Keith Bissinger of Orangeville recorded his sixth track championship in the division.

Selinsgrove Speedway is back in action with a big holiday weekend racing program at 7 p.m. SUNDAY, Sept. 2, with the Jeff’s Auto Body & Recycling Center Summer Spectacular featuring twin 30-lap features for 360 sprints, sanctioned by the Patriot Sprint Tour, and super late models paying $3,000 to win and $300 to start. The pro stocks and roadrunners will also be on the racing card. Pit gates will open at 4 p.m. with grandstand gates at 5 p.m. There will be no racing Saturday night.

Polesitter Colby Womer powered into the lead at the start of the 360 sprint car feature with third-place starter Adam Carberry getting by second-place starter Mallie Shuster for the runner up position.

A hard crash by Jim Shuster in turn three on lap four brought out the red flag. J. Shuster was not injured.

On the eighth lap, however, Layton’s car blew a tire and he was able to rejoin. Shultz passed Taylor for third on the restart and before the lap was completed got by Carberry for second.

Shultz reeled in Womer in a wheel to wheel race for the lead with Shultz making the winning pass using the inside lane in turns one and two. On the 18th circuit, ninth-place starter Mark Smith passed Womer for the runner up spot.

Smith attempted to catch Shultz for the lead and win to no avail. Shultz was victorious by 3.5 seconds over Smith, Taylor, Womer, and Carberry.

On lap 19, Rine’s car dropped off the pace entering turn three and was struck by Coleby Frye’s car. Rine was able to rejoin the race with the Moon Shine Camo series title in jeopardy now. The restart saw several cars get involved in a tangle in turn four.

In the final laps, Haus held the field at bay and posted a 4.2 second margin of victory over Christine, B. Bernheisel, J. Bernheisel, and 14th-place starter Dylan Yoder.

Second-place starter AJ Hoffman pulled into the lead at the start of the pro stock feature but was passed by fourth-place starter Brandon Moser in turns three and four of the first lap.

While Moser set the pace at the front of the pack, Hoffman held down second and multi-car race for third took place between polesitter Cory Long, fifth-place starter Shaun Lawton, and sixth-place starter Kyle Bachman.

By lap five, Bachman secured the third spot and closed in on Hoffman for second. On lap nine restart, Bachman slipped by Hoffman for the second position and chased Moser to the checkered flag.

Moser was victorious by just .90 of a second over Bachman, Hoffman, Lawton, and AJ Stroup.

Zook took over the runner up position on lap nine and quickly closed in on Bussey. The final two laps were the most suspenseful of the night as Zook raced in Bussey’s shadow. Racing off turn four for the checkered flag, Zook won the race by a half car-length over Bussey. Brunson, Jake Jones, and Smith Cope rounded out the top five.