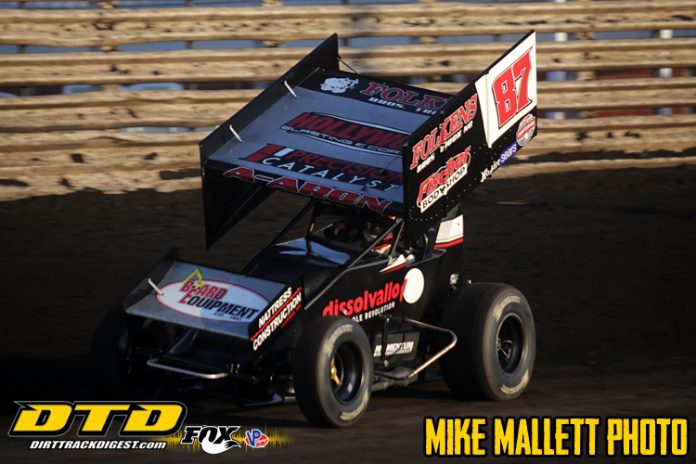 PORT ROYAL, PA – To say that All Stars Circuit of Champions title contender Aaron Reutzel of Clute, Texas, has his sights set on the $51,000 Port Royal Speedway 51st annual Tuscarora 50 payday coming up on September 8 would be putting it mildly.

The 28-year old driver of Mike Baughman’s No. 87 is currently in his quest for a career first All Stars series crown.

And he sees the Tuscarora 50 race as not only a chance to win an event that he really covets, but also as his chance to put some valuable points between himself and his closest title contenders, Carson Macedo and Chad Kemenah.

“Oh, hell yeah! That’s gonna’ be huge,” Reutzel says of how important it is to run well in the Tuscy race.

“So if you can go there and run in the top five you are more than likely going to gain a lot of points on someone.”

But to run in the top five “there,” Reutzel and his team know you need to have more than one race at the track under your belt as you enter the event, that’s they have raced at the track a total of four times this season in an effort to hone in on a winning setup.

“We’ve had some really good speed (at Port Royal) this year,” Reutzel says.

“And we made it a point to come back a couple more times to try some things to be as good as the 69K, like run the middle, ‘cuz you never see him hardly ever roll the top,” Reutzel says of recent Port Royal big race dominator Lance Dewease and his No. 69K machine.

“And we were pretty good. I feel like we got good speed, I don’t know if we have 69K speed but you never know, it could rain the night before and have a big curb and we’ll be alright.”

Reutzel says that the Port Royal Tuscarora 50 quickly went on his bucket list of races he wants to retire as a winner of.

“You know we went to the Tuscarora last year and we never even heard of the Tuscarora 50 until they made it $50,0000 to win and I felt like we just straight up got our asses kicked!”

“ I felt like our car was pretty good and we were racing our heart out and we were in the back racing for 18th. But goin’ to that event and seein’ how prestigious it was and how many fans came, it definitely made a point of goin’ on my bucket list right there as a race I want to win,” Reutzel admits.

But what does it take for Reutzel to win the 51st annual 50 on September 8, and what would it mean to add it to his bucket list?

“You’ve gotta’ be there at the end and that’s gonna’ be the hardest part. We just ran fourth at the (Knoxville) Nationals and to me it’s really hard to get there (the A Main) but then A Main time, I don’t wanna’ say it was easy, but we get to change tires,” Reutzel says of that missing dimension in the upcoming 50.

“Well Tuscarora 50 that’s gonna’ be the hardest part – what makes Donnie (Kreitz) and Lance (Dewease) so good is those guys can save their tires and still run with you and still be running hard.”

“Bu It’d be huge to win. I mean all I really wanna’ do at the end of my career is be able to say I won the big races. So, Kings Royal, Knoxville, I just wanna’ put my name on all the trophies. Tuscarora 50 is definitely one of the ones that is on the top of the list.”

Reutzel was just victorious in the region on August 23 when he scored an All Stars win at Grandview Speedway.

Presented by Ramsey’s Garage & Car Wash of Mifflintown as well as Packer’s Concessions of Centre Hall, the track marquee Tuscarora 50 event will conclude the weeklong Juniata County Fair that is held on the grounds surrounding Port Royal Speedway.

On Friday night, the oval plays host to the All Stars Night Before The 50, paying $5,000 to win, presented by former area promoter Tedd Reitz.