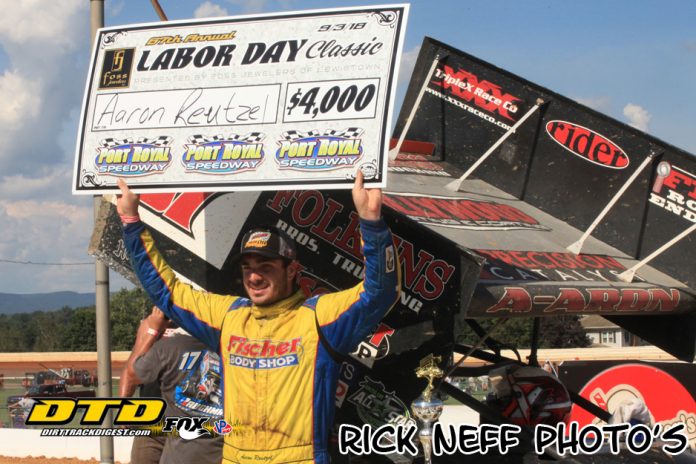 Reutzel and his No. 87 Mike Baughman owned team hit the road immediately following All Stars Circuit of Champions Sprints action in Ohio on Sunday night and arrived at the Port Royal oval at 5 am on Monday morning just in time to pocket the $4,000 Labor Day loot.

In the 18-lap econo late model main, Tim Fedder of Newport claimed his first win of the year in the division while Eric Boozel picked up the four cylinder feature.

Reutzel ran from seventh to the win in his heat and drew the third starting spot for the 25-lap Labor Day Classic.


Polesitter TJ Stutts took the lead at the start of the main event with Reutzel charging up to second on the first lap.

Stutts would enter traffic with the lead on the sixth tour with Reutzel and Brock Zearfoss in tow.

Zearfoss too had made the trip straight from Ohio All Stars action on Sunday night to compete.

Reutzel took the lead from Stutts on the seventh tour but found Zearfoss surging at the same time and the Lonestar State driver found his run at the front short lived as Zearfoss motored by for the lead seconds later to be scored the commander with eight away.

Stutts then stopped on the track with a flat tire on the ninth lap, bunching the field.

Reutzel chased Zearfoss on the restart and for the next several laps, keeping him within sight while Greg Hodnett and defending Labor Day winner Danny Dietrich began moving forward.

At the halfway point Hodnett was up to third as the race again soon entered traffic, allowing Reutzel to track down the leader.

Reutzel used what was left of the ragged top edge, up near the turns one and two wall to gain speed on every circuit while the groove switched low in turns three and four.

Looking for redemption after a final turn loss to Dietrich last year, Zearfoss did his best to work through backmarkers during the final half of the race but with five laps to go, his car pushed up off of the fourth corner, opening up Reutzel’s money lane.

Reutzel pounced at the opening and took the lead at the stripe, moving up in front of Zearfoss as the pair brushed tail tank to front wing as they crossed the line.

Reutzel was not to be denied the victory, which was his second in the area after claiming an All Stars win at Grandview Speedway a few weeks ago.

His victory came by .591 seconds over Zearfoss with Hodnett, Dietrich and Freddie Rahmer completing the top five.

Fedder led all 18 laps of the econo late model feature with Andrew Yoder in tow.

Two caution flags halted the pace on laps 10 and 14, allowing Devin Hart to move forward with him taking second from Yoder on lap 11.

Hart was unable to challenge Fedder however with the margin of victory at the finish coming in at 1.750 seconds.

Eric Boozel wired the field for the win in the four cylinder feature to take the win over Ken Leonard, Lee Zook, Travis Brown and Devin Isler.

Clair McMullen and Alex Keaton won a pair of demolition derbys to close out the scorching day of racing.