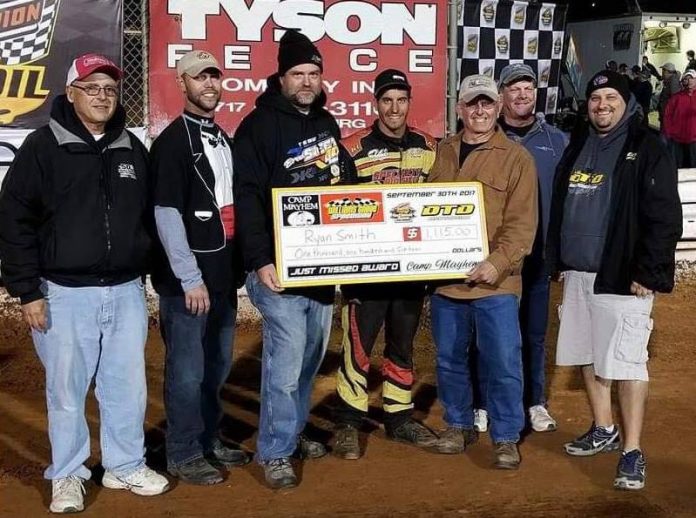 For the third consecutive season Camp Mayhem and the folks at DirtTrackDigest.com and SprintCarUnlimited.com are offering the “Just Missed” award as part of the 56th running of the Williams Grove Speedway Champion Oil National Open.

Each year the award is given to the first driver that fails to qualify and who does not have an opportunity to use a provisional starting position to make the World of Outlaws Craftsman® Sprint Car Series $56,000 to win National Open A-Main.

Camp Mayhem is made up of a collection of Williams Grove Speedway National Open supporters that make the yearly trek to the multi-day event. For most in the group it is the only opportunity they have to come together and see each during the year. The group has camped together for well over a decade with their camp on the top of the hill in the back parking lot getting bigger ever year as new friends and faces join the fun.

“We have a great time every year at the National Open,” said Camp Mayhem member Andy Callow. “We have such an awesome group at Camp Mayhem. We came up with this award a couple years ago sitting around the fire because we thought it would be cool to give back to the drivers that help us have such a great time. I still can’t believe how big it’s become.”

Dirtrackdigest.com is the number one source for Northeast racing news while also providing coverage of national Sprint Car and Late Model racing. The site offers free content from award winning journalists and photographers. In 2018 the site presented exclusive content from the DIRTcar Nationals in Florida, the Kings Royal as well as the Knoxville Nationals with in-depth coverage also planned for the National Open, Super DIRT Week in Oswego, N.Y., as well as the World Finals.

“The National Open is one of our favorite events,” cited Dirt Track Digest Managing Editor Mike Mallett. “We have such a great time every time we get to come to Williams Grove. With DTD we are always trying to find ways to give back to the racers. When Camp Mayhem asked us to help out it was a no brainer. We couldn’t be who we are without the drivers and the fans that support us.”

SprintCarUnlimited.com is a website devoted to the coverage of Sprint Car racing around the country 365 days a year. The website includes results, features, rankings, a weekly podcast, breaking news, video, and much more. The news doesn’t stop in the off-season, as we will also have coverage of the Australian Sprint Car season and PRI.

“It’s an honor to pair with Dirt Track Digest and Camp Mayhem for this special award,” SprintCarUnlimited.com owner and editor Jeremy Elliott said. “The Williams Grove National Open is one of the biggest races in the sport, and it’s pretty special to be a part of this event and give back to the drivers.”

Anyone looking to help boost the prize may contact DirtTrackDigest.comManaging Editor Mike Mallett via email at mikemallett@dirttrackdigest.com or Camp Mayhem representative Neal Wilt at justmissedaward@gmail.com.