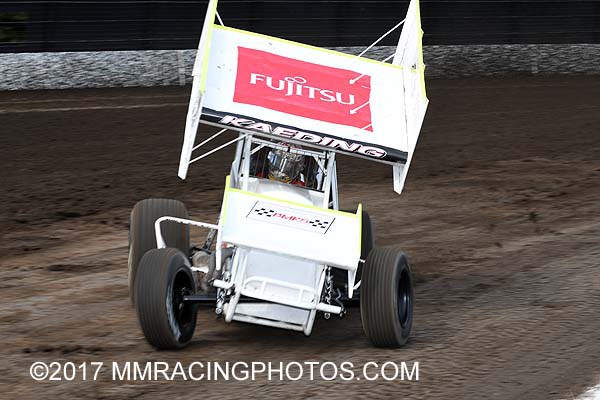 AUBURN, CA – The 60th Anniversary King of the West-NARC Fujitsu Sprint Car Series schedule was announced today and features 20 racing events at ten different dirt tracks in 2019. The 410 winged campaign is slated to award more than $500,000 in prize money and will kick off at the Stockton Dirt Track on March 2nd. The season will conclude in Stockton eight-months later on November 2nd with the $5000 to win Tribute to Gary Patterson.

To celebrate the 60th Anniversary milestone, the King of the West-NARC organization will feature many special events, including the return to the Louie Vermeil Classic at Calistoga Speedway on August 31-September 1. Louie Vermeil was regarded as the founding father of the Northern Auto Racing Club. Both events on the big half-mile oval will pay $6000 to win and $600 to start, plus additional bonuses for any Northern Auto Racing Club driver who competes in the accompanying USAC-CRA non-wing show on the same card.

The King of the West-NARC series will also be showcased at Calistoga Speedway on June 22nd, when the historic track opens its 81st season of open wheel racing.

Overall, there are four events scheduled at the dirt track at Stockton. The bell cow of the season will be the “Champions Classic,” a Brad Sweet Promotions supported event on August 23-24th. The $75,000 show features a stout $10,000 to win purse and $700 to start purse on Saturday night. This two-day show will pay tribute to 60-years of King of the West & Northern Auto Racing Club championship teams.

The prelude to that event is a special Wednesday night Gold Country Showdown at Placerville Speedway on August 21st, followed by a show at Silver Dollar Speedway in Chico on August 22nd. Several nationally known drivers and teams are expected to compete during this four-day sprint car blitz.


The month of May will be highlighted by a pair of lucrative events including the Dave Bradway Jr Memorial race at Silver Dollar Speedway in Chico (May 4th), and the $11,000 to win Peter Murphy Classic at the Tulare Thunderbowl Raceway on May 19th.

The King of the West-NARC series will also be returning to Santa Maria Speedway after a five-year absence. The action-packed quarter mile oval will feature a July 27th “Winged Madness Show” that will also showcase a $1000 to win HammerDown Wheelie Contest.

Ocean Speedway, in Watsonville Speedway, will host the Pombo-Sargent Classic (June 21st) and the popular $5000 to win Howard Kaeding Classic on July 20th.

The Dirt Track at Kern County Raceway Park and Petaluma Speedway are also on the calendar for a pair of action-packed events. Keller Auto Speedway in Hanford will be the site of the 34th Annual Cotton Classic on October 12th.

Four of the racing events on the schedule will also feature the 360 Sprint Car Challenge Tour.

“We’ve got a great schedule laid out for fans and racing teams,” states Jim Allen, King of the West Business Manager. “Our 60th Anniversary season promises to be entertaining and features a strong foundation that will continue to build on 410 sprint car racing in California. And we plan to make some major announcements in the near future to sweeten the pot even more, spreading out the money to all teams supporting our series.”

The championship point fund – as of publication time – will pay a minimum of $56,000 to the top 10 teams, plus bonuses to teams making every show. Those funds will be presented to teams at the Championship Celebration Brunch at the Brookside Country Club in Stockton on November 3rd; the day after the season finale.