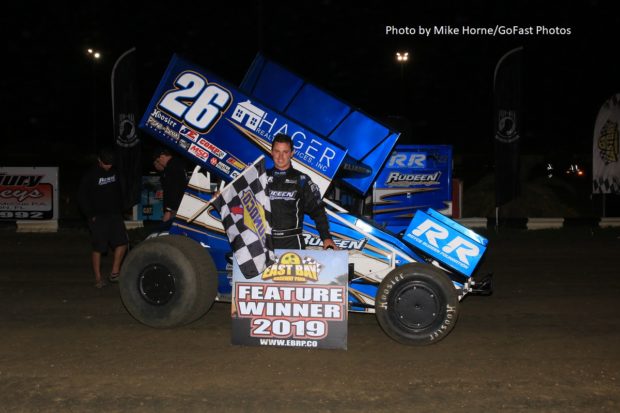 TAMPA, FL – The final week of the 43rd annual Winternationals got off to a raucous start with a nailbiting finish in the 25-lap 360 Sprint main event. Early race leader Mark Smith appeared to be destined for the opening night win until Cory Eliason changed the conversation.

Smith was clearly dominant throughout the early stages, working masterfully through lapped traffic when the situation arose and it arose often with the torrid pace Smith was maintaining. Smith claimed the lead from the start as Brett Wright slipped up into second place. As Smith closed on lapped traffic, he kept the car down low to make passes while adding to his lead. When a lap 10 caution waved for Wayne Johnson, Smith had a cushion of four lapped cars between himself and Wright. The action was hot within the top five as Terry McCarl moved to the runner-up spot and, one lap later, Tony Stewart jumped to third. McCarl would close to second and provide the next worry for Smith. On a lap 21 restart, the conversation centered on which of the top three would win.

When the green came out, McCarl made his move to gain the lead, but only momentarily. Smith got it back, but a new face was becoming a factor. California racer Cory Eliason moved to the top of the track and found plenty of speed. As Eliason slipped past McCarl, it looked like there would not be enough laps to allow Eliason to catch the leader. Eliason had other thoughts as he stayed in hot pursuit until the final corner, winning the drag race to the finish. Eliason scored the win from the 11th starting spot.

The 24-car field was set with the top 16 in passing points during the heat races locked in. The remaining eight spots were reserved for the top two finishers in each of 4 B Mains.

Luke Thomas went from worst to first in the 25-lap A Main for Mini Sprints. Thomas was actually scheduled to start on the pole, but ragged start attempts caused track officials to relegate Thomas to the tail. The move may have provided added momentum as it didn’t take long to get Thomas into the top 5. He was trading second with Robbie Smith by mid-race, but the field still had to catch Robby Hoffmann. Thomas proved to be up to the task, hunting down the leader on lap 17 and staying on the bottom to Victory Lane.

Action continues Friday night with a return visit for the three classes. An additional consolation non-qualifiers race for the 360 Sprints will be added to the card on Friday and Saturday, paying $500 to win, courtesy of Wetherington Tractor Services.