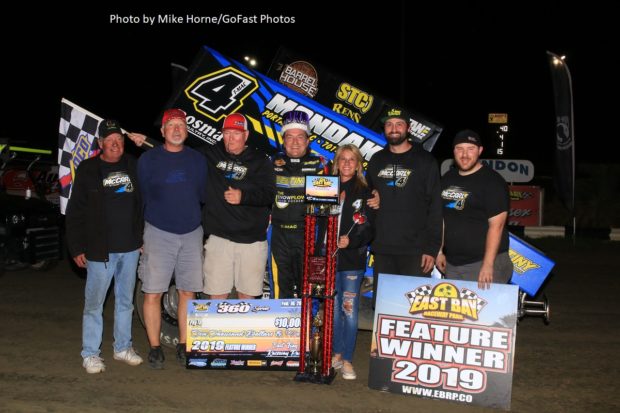 TAMPA, FL – Late race cautions have a way of sometimes rewriting stories. As Mark Smith maintained a strong lead throughout the bulk of the 40-lap Sprint A-Main, one of those yellows was about the last thing he wanted to see. The caution came on lap 38, which put the defending King of the 360s Terry McCarl right on the tail tank. When the green came out, the duo would lock into a battle that saw McCarl sweep by and claim his fourth Ronald Laney Memorial King of the 360s.

“I knew Ronald, I knew his family, his dog, his girlfriend. The year he won, he passed me and Gary Wright to get there. He was wearing the crown in the pits and I was happy for him,” said McCarl. “This race means so much to me.”

With his win, McCarl becomes the only champion to win in back-to-back seasons and has more victories than anyone else in the event.

McCarl was far from pleased when he drew a “6” as his starting position (I thought it was a “9”, he joked in Victory Lane). Now driving for Destiny Motorsports, it seems fitting that the car he drove to the win was carrying the number 4.

Former King of the 360s Jason Sides took the early lead before McCarl snatched it away on the second lap. Smith moved up to second to challenge McCarl, getting by the leader as the field faced lapped traffic. Smith worked masterfully through the lapped cars, a feat he had to do in each of the previous two nights. A lap 7 restart put a lapped car between Smith and McCarl and Smith used that chance to scoot away from contention. McCarl had his hands with the surprising charge of Matt Kurtz who had started ninth but was quickly in the top three. Also on the move was Sam Hafertepe Jr., who grabbed fourth on lap 15. Cory Eliason was back on the move to head back to the top five while Smith was biding his time up front. McCarl regained second on lap 22 and kept it when the second caution appeared on lap 24. Smith would still move out on the restart forcing McCarl into a “catch me if you can” situation. With two laps to go, problems for Mississippi’s Dale Howard brought his car to a halt and the field refiled for the restart. McCarl was determined, swinging by Smith for the lead and the eventual win.

Robby Hoffmann made a return visit to Victory Lane, capturing the Mini Sprint 25-lapper. Hoffmann got by Oklahoma racer Daison Pursley, who claimed his third top five finish of the week at the checkered flag.

Kevin Strife made it back-to-back for the Micro Sprints. The 2018 East Bay Raceway Park track champion had the lead by the third turn and was never caught on his road to the win.

The Saturday action concludes the 43rd annual Winternationals, which began in late January. All in all, Mother Nature proved hospitable with only one show lost to rain over a four-week span.