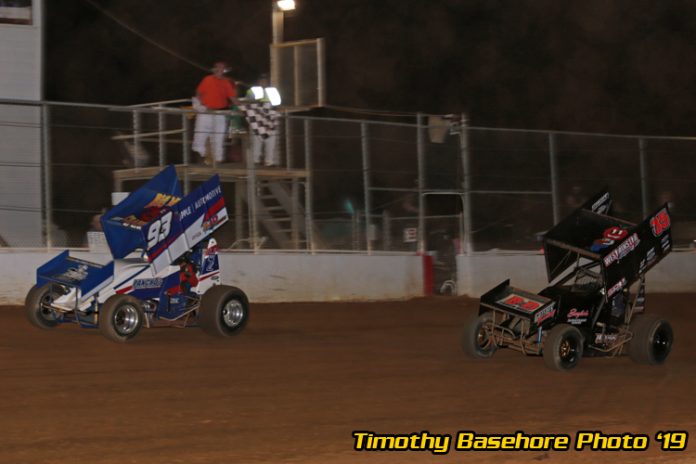 Hanover, PA – Mike Bittinger’s commitment to the high side paid off as he held off Steve Owings by .105 seconds to claim the Insinger Performance 358 Sprint Car Spring championship and his 18th career Trail-Way Speedway 358 victory.

“I’ll tell you what,” Bittinger began in victory lane, “if you guys get this track like this every week it’s going to be nuts around here. I love it! This is great!”

Bittinger continued, “I was beginning to wonder…am I getting too old or am I losing it? We started up front… but I’m going to take this one for sure.”

The Abbottstown driver started on the pole with New Oxford’s Kenny Kuhn starting on the outside of the front row. Kuhn was able to maintain second for the first five laps until Cody Fletcher took advantage of him on a lap five restart, taking over the runner up spot, with Owings following Fletcher past Kuhn a lap later.

“The unique part was that those lapped guys were running on the top side,” Bittinger said. “The way we had the car set up, I really couldn’t do much more than rip around the top and I tried to go under them but I was losing ground. So I just had to hit them at the right spots, and thank God experience helps there.“

As Bittinger lapped Andrew Hake, the caution flag flew for Tim McClelland and John Sharpe, who were running just ahead of the leaders. Both cars were able to rejoin the field.

On the next restart, Fletcher continued to hold off Owings for second, but only until lapped traffic once again became a factor, allowing Owings to complete the pass for the runner up spot, thus setting his sights on the racelong leader.

Bittinger and Owings continued to maneuver around lapped cars for the next few laps but had the final five laps to battle it out with little to no interruptions.

“With five to go I started to run out of fuel,” Bittinger said. “In the middle of the corner, it’d stumble and shut off. Normally when that happens, you’d slow down and go to the bottom to try to keep your fuel flat in the tail tank. But I thought, you can slide job me, you’re going to have to get me on the bottom because I’m not moving off this top!”

Bittinger’s commitment to the top side proved beneficial for the #93 sprinter as he crossed the line to win his first 358 Sprint Car feature of 2019.

Bittinger admitted the track being widened over the off season was a great improvement for the speedway.

“I’ll be honest, the track’s wider and you can feel it as a driver,” Bittinger said. “It kind of spreads everybody out. The guy that likes to run the bottom, he’s running it a little bit lower, gives you more room outside of him. So it’s a little bit less hairy when you’re trying to drive off of someone’s right rear tire on entry.”

The race’s lone caution, brought out by Mechanicsburg’s Mike Sherman on the fourth lap, gave Travis Keiser and Jim Young an opportunity to turn up the heat on Rudisill, but he never gave them the chance.

The field stayed green over the remaining 16 laps with Rudisill taking the checkered flag 1.561 seconds ahead of Keiser in second and Young in third.

Enola’s Scott Houdeshell made an early race pass and drove on to claim the 20-lap Pizza Shop of Etters Central PA Legends sponsored by Harvest Chapel feature at Trail-Way Speedway.

Houdeshell, who started third on the grid, passed leader Mason Chaney on the frontstretch and never looked back, scoring his 7th career Trail-Way Legends win. The win places him in a tie with Bob Stough for fourth overall on Trail-Way’s all-time win list. Houdeshell also established a 20-lap track record with a non-stop time of 6 minutes, 37.783 seconds.

Houdeshell crossed the line 2.794 second ahead of Chaney with Travis McClelland, Travis Perry and Bill Diehl completing the top five.

Limited Stock driver, Robbie Carroll, made the winning pass on racelong leader, Matt Worley, on the 10th lap, driving on to his second victory in as many races at Trail-Way Speedway.

Heat winners for the Limited Stocks were Carroll, Matt Chronister and Cody Klinedinst.