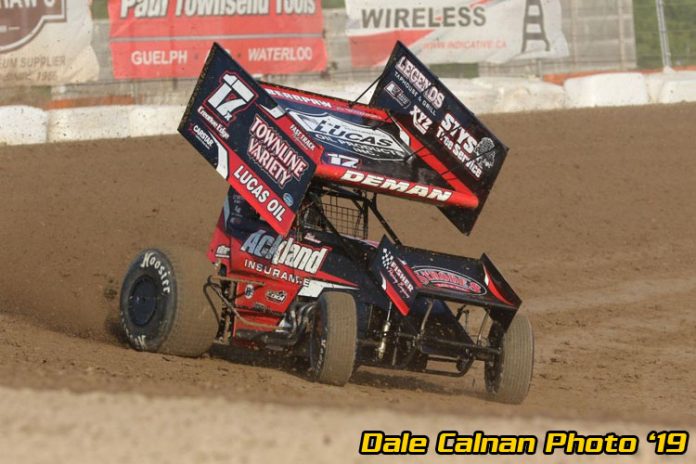 OHSWEKEN, ONT – The long eight month off-season will finally come to a close when the first green flag of the season drops at Ohsweken Speedway for the Ackland Insurance season opener on Friday, May 24. The fast and high-banked 3/8-mile oval has sat dormant for more than 250 days prior to Wednesday night’s Test and Tune session, but will finally come back to life with a full card for Friday Night Excitement. All four Ohsweken weekly divisions will be in action to begin their respective seasons, including the Kool Kidz-Corr/Pak 360 Sprint Cars, Strickland’s GMC Crate Sprint Cars, Middleport Mechanical Thunder Stocks and HRW Automotive Mini Stocks.

Race time for the Ackland Insurance season opener is 7:30pm. Adult admission is just $14 while Seniors (65+) and Youths (13-17) are only $10. Kids aged 7-12 are only $3 and Kids 6 and under are free. This pricing is in effect for all weekly Friday Night Excitement shows in 2019. Cars will be on track for the first time in 2019 on Wednesday, May 15 for the rescheduled Test and Tune night. For the full schedule of events, visit www.ohswekenspeedway.ca.

The new season for the Kool Kidz-Corr/Pak 360 Sprint Cars is one of the most anticipated in recent memory with a crop of four full-time rookies planning to chase rookie-of-the-year honours. The top-five in the championship standings from 2018 are all returning to the division, including two-time champion Dylan Westbrook, who has moved to the Hill’s Racing Team. Last year’s runner-up Jim Huppunen will look to improve by one spot this season while third-place finisher Cory Turner will now drive for the Burger Barn Racing team with a new number on his top wing in No.13. For a full Kool Kidz-Corr/Pak 360 Sprint Car division preview, click here.

With over 40 drivers pre-registered for the 2019 season, the Strickland’s GMC Crate Sprint Car division will be one of the toughest and most competitive divisions at the track each week. Four drivers from last year’s top-eight have moved up to the 360 Sprint Car ranks, including the division’s defending champion. That leaves a handful of Sprint Car veterans looking to fend off the challenges of young guns and sophomore aces. For the full Strickland’s GMC Crate Sprint Car division preview, click here.

The Middleport Mechanical Thunder Stocks are set to roar back into action with their popular brand of three-wide and action-packed racing. Four-time and defending champion Dave Bailey will be back in his drive for five championships. It’s a familiar cast of characters for 2019 with all drivers that finished in the top-eight last season returning to the division, which includes runner-up Trevor DeBoer, Logan Shwedyk, Ken Sargent, Ryan Beagle, Jim Lampman, Christopher Hale and Blake Bomberry Jr. Two drivers are moving up from the mini stock division and will battle in rookie-of-the-year contention with Adam Plazek and Clinton Nicholls racing with the Thunder Stocks this year.

In the HRW Automotive Mini Stock division, fans can expect the same edge-of-your-seat five-wide racing they have come to know and love on Friday nights. The reigning track champion Matt Nuell is set to defend his title in 2019 after claiming the top spot by a single point last September. He’ll face a familiar list of competitors with each of the top-10 drivers from last season returning to the track this year, including breakout driver Gillian Hils, Dusty DeBoer, Jonathan Ayrton and fan favourite “Cheeseburger” Sean Iftody. The remainder of last year’s top-10 included Mike Sarantakos, Tim DeBoer, Kyle Wert, Martin Schroeder and Tristan Da Silva. The division will also welcome at least three new drivers for the rookie-of-the-year chase including Tom Cole in No.6r, Jason Thomson in No.16T and Ryan Hillar in No.21H. The HRW Automotive Mini Stocks will also start their season with the first home track race for the Insta-Panels Duel on the Dirt series.