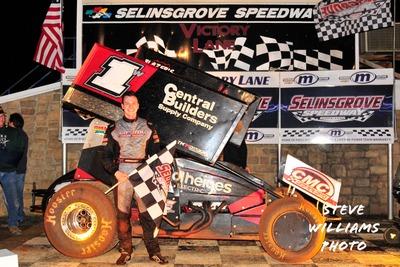 It was Reinhardt’s second win of the season in the 39th annual 30-lap tribute race to the late Hall of Fame promoter Gunn at the wheel of the Westbrook Enterprises No. 1W

Andrew Yoder of Selinsgrove drove to victory in the 30-lap limited late model championship that paid $1,500 to win.

Kyle Bachman of Selinsgrove was victorious in the 15-lap pro stock race, while Smith Cope of Danville won the 12-lap roadrunner race.

Selinsgrove Speedway is back in action at 7 p.m. Saturday, June 1, with the 360 sprint cars, the A&A Auto Stores Pro Stock 20, USAC SpeedSTR series, and roadrunners. Track gates will open at 5 p.m.

Cody Keller shot into the sprint car lead from the pole position and was followed by Ryan Kissinger, Kyle Reinhardt, Chad Layton and Jason Shultz.  Thomas Radivoy quickly brought out the yellow with a spin in the third turn.

After having some trouble getting restarted, Reinhardt showed some speed by taking over second with Layton moving into third.  Lap four saw yet another caution for Ryan Stillwaggon.

The restart worked for Reinhardt as this time he took the lead from Keller and started to pull away.  Layton using the top side of the racetrack got around Keller and Kissinger followed.

Rookie Jake Hummel rolled to a stop on lap 23 again slowing the field.

Reinhardt went on to lead the rest of the way picking up his second win of the season by 3.85 seconds over Kissinger, Derek Locke, Shultz and Keller.

Sprint car heats were won by Keller and Layton

Zach Kauffman slowed on the track bringing out the yellow on lap six.   Two laps later, father Troy and son Shaun Miller got together with Shaun spinning out.

Yoder, who started his career on the 1/5th mile inner oval was untouchable for the rest of the race, won going away over J.Yoder, T. Miller, Garman and Jared Fulkroad.

Limited late model heats were won by Yoder and Miller.

Shaun Lawton drove past Tommy Dawson for the lead in the pro stock feature and was followed by Kyle Bachman, Brandon Moser and AJ Stroup.

The caution was brought out at the half way point for Wayne Shaffer.

Bachman dogged Lawton and on lap 13 ran hard into the third turn coming off the fourth turn with the lead and the win over Lawton, Moser, AJ Stroup and Dawson.

Smith Cope inherited the lead on lap two when the leader spun and led the rest of the way despite being tested by Will Brunson to win the roadrunner feature over, Brunson, Bob Bussey, Jake Jones and Keith Bissinger.