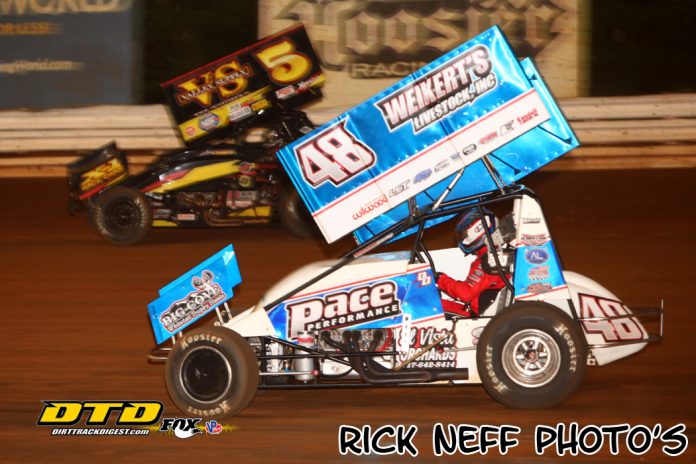 MECHANICSBURG, PA – Dylan Cisney came within yards of winning the first Williams Grove Speedway 410 sprint car feature of his career on Friday night but finishing just yards ahead of him, or .066 seconds, was Danny Dietrich.

Dietrich pulled off a last turn, last lap swoop for the lead that robbed Cisney of the glory until another day although Cisney appeared ready for the limelight for the first 24 and three-quarter laps.

Elsewhere, Kevin Nouse scored the 358 sprint car main to notch his first oval win of the year and become the third division winner in as many races this season.


Cisney started on the pole for the 25-lap 410 sprint main and raced to stay ahead of second starter Brian Montieth from the very beginning and it was no easy task for Cisney to stay at the helm.

Already on the second lap Montieth got around Cisney only to see Cisney beat him back to the stripe.

And this scene played out repeatedly throughout the event, mostly in the second turn when Montieth would get under Cisney and take control, leaving Cisney to fight back, which he always seemed to be able to do.

On two occasions, Cisney even dropped off of the cushion and raced back to Montieth’s inside as the pair shot down the backchute in order to reclaim control but in most instances, Cisney was able to catapult back around the outside of his challenger.

The first caution flag of the event unfurled with nine laps to go when Anthony Macri stopped on the track and then red flag appeared on the restart when Rodney Westhafer spun in the first corner while Gerard McIntyre Jr. vaulted over the fence.

Cisney thwarted Montieth when action resumed and Dietrich made a huge move from sixth to third but again the red flag came out two laps later, this time for a crashed Chase Dietz on the frontchute.

This put Dietrich in play but the show was between Cisney and Montieth when action again restarted with Cisney again getting the better of the deal, racing with precision to stay ahead of his challenger despite moves by Montieth that saw him nose into the lead briefly.

But the complexion of the race changed with five laps to go when a final caution flag bunched the field.

Dietrich stuck to Montieth when green reappeared and pulled a third turn dive to steal second with three laps to go.

Dietrich’s dives into three would prove lethal for Cisney in the final turns as the Gettysburg driver was able to get just close enough to complete a pass on the cushion –running leader.

Cisney then turned the car to the inside of  Dietrich as the pair raced to the checkers, drawing back up to Dietrich’s cockpit by the finish.

Dietrich picked up an extra $250 from WC Eshenaur and Sons Fuels for the last lap pass to go along with the posted $3,680 winner’s share.

It was his second win of the season at Williams Grove.

Nouse took the lead from Tyler Brehm on a lap three restart to speed to the 21st limited sprint win of his career at Williams Grove in the 20-lap 358 sprint feature race.

Doug Hammaker raced into second from the fourth starting spot on the fourth lap.

Hammaker was able to run down Nouse during the final few laps but Nouse stayed safely ahead to the finish.

Heats went to Brehm and Nouse.